AUSTIN, Texas (March 1, 2013) – Max Papis qualified the No. 61 R.Ferri AIM Motorsport Racing with Ferrari F458 on the GT front row Friday for tomorrow’s inaugural GRAND-AM of The Americas presented by GAINSCO and TOTAL, the debut sports car race at the new Circuit of The Americas road course. 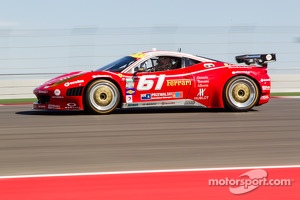 Papis, who is making his second race start with the new No. 61 R.Ferri AIM team, qualified the Ferrari for the first time after his co-driver Jeff Segal was at the wheel for time trials in last month’s season-opening Rolex 24 At Daytona. On Friday, Papis turned a top lap time of 2:09.205 (94.733 mph) and will start alongside the similar F458 of pole-winner Alessandro Balzan for an all-Ferrari front row.

“Honestly, I wasn’t really sure what to expect when we went out there in qualifying,” Papis said. “It was my first qualifying in a while and I am actually really pleased with what we did. Considering the learning curve that we have, and my experience with the car, I left a little bit on the plate, but the car wasn’t exactly like we had it in practice. That is just part of the learning curve that we have to do but when the car is not great and you start of the front row, it is pretty awesome.”

Segal, the two-time and reigning GRAND-AM Rolex Sports Car Series co-champion with AIM/FXDD teammate Emil Assentato, will take over from Papis during Saturday’s race and drive the No. 61 to the finish. He drove the AIM/R.Ferri Ferrari to the top time of 2:09.488 (94.529 mph) in Friday morning’s opening session, the first ever official GRAND-AM Rolex Series practice run at Circuit of The Americas.

“Our cars rolled off the trailer really, really well,” Segal said. “It is a big credit to everybody on the team and it is pretty impressive because we weren’t here testing. But we used a lot of the data that we gathered from the Challenge car work that Anthony (Lazzaro) and I have done. We really put a good plan together and I think we made a lot of a little bit of information.”

While Papis, Segal and the No. 61 AIM/R.Ferri team have enjoyed a relatively trouble- free and fast opening day of competition at Circuit of The Americas, the team’s sister No. 69 AIM/FXDD Ferrari has not been as fortunate. The Ferrari made solid contact with the tire barrier in Friday afternoon’s final practice session before qualifying but driver Assentato was uninjured in the single car incident. He and teammate Anthony Lazzaro will co-drive the repaired Ferrari in tomorrow’s race.

“It is unfortunate what happened, just a small little issue entering the esses turned into a big issue with hitting the wall,” Lazzaro said. “But Emil is OK, the guys are going to work hard, the main part of the chassis and everything is OK, it is intact, it is just a lot of bodywork. A lot of welding but they will have it back and ready for the warm-up final practice session tomorrow.”

Race-day Saturday begins with a final 20-minute practice session at 8:30 a.m. before the featured GRAND-AM of The Americas presented by GAINSCO and TOTAL at 3 p.m. local time.