INDIANAPOLIS, Ind. Over the past four decades, Mazda has scored hundreds of race wins at tracks across the county, and around the world. But until today, Mazda did not have a win at what is perhaps the most famous racetrack in the world, the Indianapolis Motor Speedway. 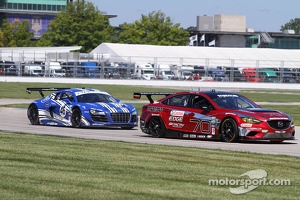 The win was the fifth in a row for the all-new Mazda6, and moves it ahead of Porsche after eight of 12 races in the GX manufacturers championship race. As has been the case all year long, it was a three car battle between Mazda and Porsche, with both brands leading at times. Eventual winner Sylvain Tremblay took the lead with 47 laps remaining in the three hour race, and was never headed.

The Indy race also was the third and final round of the Grand-Am North America Endurance Championship, the first two rounds having been the Rolex 24 at Daytona and the Sahlen’s Six Hour at Watkins Glen. The SpeedSource Mazda won the team championship for the GX class.

This was only the second year that sports cars have been a featured race at the track most noted for the famed Indianapolis 500. The track has had wide variety of powertrain configurations and technologies compete, but never before had a diesel engine won at Indy. The most recent diesel to compete was the Cummins Engine Special, which won the pole for the Indy 500 in 1952.

The SKYACTIV-D Clean Diesel engine in the all-new Mazda6 is a true production-based engine. The engine is 51 percent stock by parts count, and 63 percent stock by weight. Mazda chose this path as it is the most honest way to demonstrate the quality, durability, and reliability of Mazda cars.

John Doonan, Motorsports Director, Mazda North American Operations: “We made history today, both for Mazda and for SKYACTIV Clean Diesel Technology. While this is our fifth win of the season, and fifth in a row, it is by far the biggest win to date. To win at Indy is every racer’s dream, and that dream came true for Mazda here today.

So many people at Mazda in the U.S. and Japan, working hand-in-hand with the amazing SpeedSource team, have never stopped making progress in this program. We also are grateful for our partners at Castrol, ModSpace and VISIT FLORIDA, all of whom have contributed to our success.”

Sylvain Tremblay, Owner/Driver/Engineer, SpeedSource Engineering: “We were just trying to stay out of the way of the DP cars, and ended up on the marbles and almost kissed the concrete, but ended up kissing the bricks. It was not an easy day, but the team remained focused and we came through for the win. To score the first ever win for a diesel at Indy, in our first year with the program, speaks volumes for Mazda and our team.”

Tom Long, Co-Driver #70 Mazda6: "The race with our SKYACTIV-D Mazda6 was certainly exciting, and the SpeedSource team worked so hard to persevere. It's an incredible experience to share this first victory at Indy with Mazda and the entire team. The tradition of 'kissing the bricks' will be a memory I will never forget."