The Shank squad will field the No. 6 driven by Gustavo Yacaman and Justin Wilson, as well as returning to action with the No. 60 “Red Ruby” Riley powered by Ford, piloted by the “Wizard of Ozz” Negri and John Pew.

Pataskala, Ohio (14 August 2013) – Michael Shank Racing will look for a storybook finish this weekend as the Ohio-based team travels west to Kansas Speedway for Round 10 of the GRAND-AM Rolex Sports Car Series championship on Saturday. The Shank squad will field the No. 6 Tuvacol/AERO Ford-Riley driven by Gustavo Yacaman and Justin Wilson, as well as returning to action with the No. 60 “Red Ruby” Riley powered by Ford, piloted by the “Wizard of Ozz” Negri and John Pew.

Rather than ‘somewhere over the rainbow’, Michael Shank Racing hopes to be somewhere in victory lane on Saturday night as the team looks to return to podium form in GRAND-AM’s debut race at the Kansas Speedway roval. The new circuit incorporates both the high speed banked oval as well as the slower corners of the infield road course. 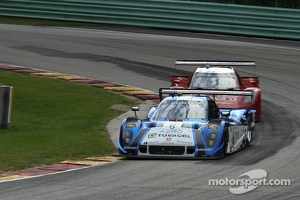 Michael Shank Racing will arrive in Kansas fresh off of a top-five finish at Road America last Saturday, when Pew and Negri came home fifth in the VISITFLORIDA.com Sports Car 250. It was a consistent team run, as the No. 60 Ford-Riley was followed closely across the line by the No. 6 Michael Shank Racing machine of Yacaman and Wilson who placed sixth. The group aims to improve on that effort with a podium finish at the new venue.

“For whatever reason, we’ve had some very good days on tracks that GRAND-AM has debuted on, and it’d be great to add to that tradition this weekend,” said Shank. “It is always exciting to go to a new market, and hopefully we can put on a good show for these new fans. I think it could be wild, because this is a very fast place, but there are also some very slow corners and big brake zones so it could mix things up a bit in the race, particularly when the guys get into the traffic.”

Adding confidence ahead of the weekend is the fact that the team spent time testing at the Kansas facility last October with Negri at the wheel of the No. 60 Daytona Prototype machine. The two-day test provided valuable data for the Michael Shank Racing squad and the group will look to put that to good use this weekend.

“It's one of the fastest tracks we've been to, and it's also one of the hardest ovals that we have gone to.” said Negri of the new facility. “It is much faster than Homestead or any of the others. Braking for Turn 1 will be really interesting because it's one of the hardest braking points, especially because we run the car pretty trimmed out there. But it has a lot of grip, so I enjoyed it. The track is fun to drive and we had a good car when we tested there so I am looking forward to going back.”

While the road to victory lane around Kansas Speedway may not be as easy as simply following the yellow brick road, the 2.75-hour race under the lights will take a lot of heart, courage and smarts – all elements of Michael Shank Racing’s fighting mentality.

Michael Shank Racing will have a full day to dial in its two Ford-Riley Daytona Prototypes on Thursday as a promoter test day is set for 1:00 PM – 9:15 PM (CT). Friday will feature official practice ahead of qualifying which is set to begin in the darkness at 9:45 PM (CT). Saturday will see a 30-minute final practice in the morning with the green flag set to drop on the 2.75-hour Rolex Series race at 7:00 PM (CT).