The Ohio-based team has returned to a two-car effort this year with the No. 60 and No. 6 Ford-Riley Daytona Prototypes.

Pataskala, Ohio - With over 200 GRAND-AM Rolex Sports Car Series Daytona Prototype entries to the team’s credit, Michael Shank Racing has competed at some of the most prestigious race tracks across the country. This weekend, the team will add yet another historic circuit to its repertoire as the 2012 Rolex 24 At Daytona Champions travel to Road Atlanta for the Grand Prix of Atlanta and Round 4 of the GRAND-AM championship. 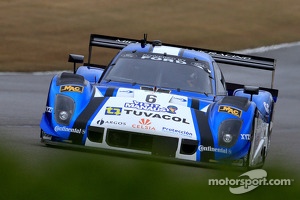 The Ohio-based team has returned to a two-car effort this year with the No. 60 and No. 6 Ford-Riley Daytona Prototypes. Longtime Michael Shank Racing drivers Ozz Negri and John Pew drive the No. 60 machine, but Negri will be sitting the Road Atlanta round out as he recovers from an off-season training injury.

Michael Valiante, who drove for Michael Shank Racing during the 2009 and 2010 seasons, was tabbed to sub for Negri in the Road Atlanta event. The Canadian sports car ace already has experience at the new venue.

Pew raced at Road Atlanta while competing in the open wheel ranks and the experienced driver pairing looks to be a contender in Saturday’s highly anticipated event.

“It’s been awhile since I’ve been at Road Atlanta,” said Pew. “When I was doing the Star Mazda series I did a couple of seasons there at Road Atlanta. I loved the track and before that I was doing Skip Barber. So it’s been awhile --but it’s still in my head! I have some video I can look at. It’s a great track. I’m really glad that we’re racing there. It will be great for the Daytona Prototypes. I can’t wait to do Turn 1 and 2 and the esses and coming down the hill in a DP. It will be great. It’s great for the series and great for the fans.”

Former open-wheel pilots Gustavo Yacaman and Antonio Pizzonia will once again share the driving duties in the No. 6 Michael Shank Racing Ford-Riley. With two top-10 finishes in their first two Rolex Series races together, the duo are taking on a host of new challenges together, adapting to the Daytona Prototype competition and learning a range of new tracks here Stateside. While Yacaman has experienced several of the circuits thanks to his experience in Indy Lights, Pizzonia is starting with a blank slate at a lot of tracks. But this weekend, both will be looking to learn the ins and outs of Road Atlanta.

Though new to GRAND-AM and many of the tracks the series visits, the two have shown to be a strong pairing. The team looked poised to claim a podium finish at Circuit of the Americas before contact late in the race saw the group settle for seventh at the finish and then went on to claim a top-five finish at Barber Motorsports Park.

For many of the GRAND-AM teams, the visit to Road Atlanta marks a rekindled affinity for the track, having been so many years since they have competed there.

For team owner Mike Shank, who first worked his way up in the sport as a driver, the return to Road Atlanta takes him back to a past life.

“It has been so long since I’ve raced there--I think the last time was in a D Sports Racer,” said Shank. “I remember driving against (current AIM Autosport with Ferrari driver) Anthony Lazzaro and (current team owner) Peter Baron! The track is a challenge, every lap. You have blind turn in points and all the elevation changes. But between the experience that John (Pew) and Michael (Valiante) have at the track, and Gustavo (Yacaman) and Antonio (Pizzonia) being able to pick up new tracks quickly, hopefully we can be right on the pace when it matters.”

The Grand Prix of Atlanta will be broadcast LIVE on SPEED starting at 4:30 PM ET Saturday, April 20.