Virginia Beach, VA – The #6 Mitchum Motorsports Track Pro Advisor GS.R Chevrolet Camaro takes to the track next week at Daytona International Speedway with two accomplished racers sharing driving duties. Sunoco Challenge winner Lawrence Davey jets across the Atlantic for his prize winning race of a lifetime after having won the season long competition in the United Kingdom. Mike Skeen, who is a pole winning driver in the GRAND-AM Continental Tire Sports Car Challenge, jumps in the Camaro after a successful test earlier this month at the famed speedway. 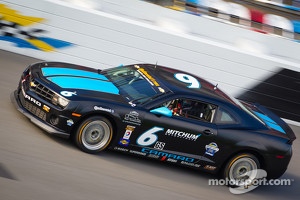 Team principal Chris Mitchum was pleased with the test at Daytona earlier this month, where Davey and Skeen got acclimated with the Camaro as well as the team. “I was really impressed with Lawrence who got up to speed very quickly. He took a measured approach and listened to our engineer as well as Mike (Skeen) in the session debriefs,” said Mitchum. “Each session he was faster than the previous one and I don’t think he put a wheel wrong over the three day test.”

“Mike is a proven driver in GRAND-AM already, and he showed his experience straight away. Each session he laid down a lap that was highly competitive, putting us in the top ten by the end of the weekend,” added Mitchum. “This driver pairing combined with the Camaro that we have been developing for three years, may be our strongest effort to date.”

Davey showed very strong at the Daytona test and had this to say about his new GRAND-AM team. “After winning the Sunoco Challenge I have been excited but also nervous. I headed to the Roar Before the 24 test not knowing what to expect, but after spending three days with the guys at Mitchum Motorsports and in the car I feel very settled heading to the race,” said Davey. “Mitchum Motorsports have been very helpful both at the track and away from it and I am confident that they have signed a great co-driver in Mike Skeen. Who knows..... if everything continues to go well, I will put some serious thought into competing in the series long term. I would like to say a massive thank you to Sunoco, GRAND-AM and Mitchum Motorsports for this amazing opportunity.”

This is the second year in row that the Sunoco Challenge winner has teamed with Mitchum Motorsports at Daytona. Managing Director of the Anglo American Oil Company, Anders Hildebrand, shared Mitchum’s enthusiasm for the test results. “It's great to be back with Mitchum Motorsport again as the chosen team to run the winner of the Sunoco GRAND- AM 200 Challenge. We did not know what to expect from Lawrence, having only raced a small Legends car, but thanks to a great job by the whole Mitchum team in terms of coaching and car preparation, Lawrence exceeded all my expectations by being on the race pace in both the wet and dry. I'm very excited for the race when Lawrence will be paired with the very experienced pro-racer Mike Skeen.”