The testing allowed the MOMO team to time for testing equipment and drivers.

The No. 30 MOMO NGT Motorsport team spent the first weekend of January 2013 at the Daytona International Speedway participating in the Roar Before the 24 Daytona Test Days. The weekend was a useful opportunity for teams to test equipment and drivers in preparation for the upcoming Rolex 24 at Daytona, January 26-27, 2013. 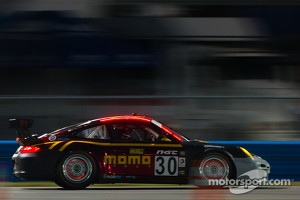 MOMO team drivers Sean Edwards and Kuba Giermaziak took turns to get better acquainted or reacquainted with the track. Edwards previously competed at last year’s 50th anniversary of the Rolex 24 at Daytona with the MOMO NGT Motorsport team. Giermaziak is competing at the 3.56-mile, 12-turn Daytona speedway road course for the first time this year. MOMO owner and team driver Henrique Cisneros and French Porsche factory driver Patrick Pilet did not participate in the January Test Days.

“Our main goal was to shake the car down, get Kuba some seat time at Daytona and work on the car set-up,” said NGT Motorsport team owner Ramez Wahab. “We did not care about top end speed at the Test and therefore ran with stock GT3 Cup gearbox and engine. We had two incidents; one early in practice that damaged the front bumper and radiator. The second one was at the end of night practice and the right rear of the car was damaged. We missed the last day of testing so we could get back to the shop in Miami and continue working on the car to make it race ready for the Rolex 24.”

“The testing went really well. We worked on getting a set-up,” said British Porsche Supercup driver Sean Edwards. “Too bad Henri couldn’t join us but he had work commitments. He’s a busy guy, so he sent me and Kuba along to do the testing work. We both worked with our engineers and I think we’ve got a good race set-up. We didn’t have our engine or gearbox for the test so we were lacking the pace. Once we get those, we will be bang on the money and fighting for the win. Patrick will also be joining us so we will have one of the strongest line-up at Daytona. I’m definitely looking forward to it.”

“It was great to come to Daytona to test,” said Kuba Giermaziak, Polish Porsche Supercup driver. “With the bad weather and incidents with the car, we did not get as much time as we hoped. Of course, as a driver you always want more seat time. We made some accomplishments on set-up and feel we will be ready for the race the end of the month.”