The No. 9 Stevenson Motorsports Camaro GS.R driven by Matt Bell and John Edwards came home with a top five finish at the season finale of the 2012 Continental Tire Sports Car Challenge Series. The team came into Lime Rock 17 points out of third place and just hoping to stay in fourth, in the Team Championship. The race was part of the BMW Challenge weekend at Lime Rock Park and the best part of all came when the fourth place finish in the GS race moved the Stevenson team into third overall in the team championship and moved driver Matt Bell* into second place in the Driver’s Championship. The win also helped lock down third in the Manufacturer’s Championship for Chevrolet. 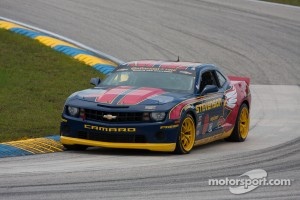 (*Bell’s co-driver John Edwards had to miss several races this year due to an injury.)

At race end, they finished third in the Team Championship and Matt Bell took second place in the Driver’s Championship, after Matt Plumb was disqualified from the race results.

The weekend started off very wet with a steady rain leading to the cancellation of Friday’s scheduled qualifying session. Teams were placed on the starting grid based on team owner points. This meant the Stevenson Camaro began the charge to a top five finish from the fourth starting position.

Mike Johnson’s strategy called for the team to stay out of the pits during the first few caution periods as attempts at passing in a crowded GS field on the short Lime Rock circuit has it hazards. The strategy worked as the No. 9 Stevenson Camaro took the lead and held it for quite some time.

Bell recounts his glorious time running at the front of the field: “I started my stint close to the front with the sole goal to give John a clean car in a better position. On such a tight course, both Lawson (Aschenbach) in the No. 01 Camaro and I found out how hard it is to pass a Porsche. (Aschenbach’s car was towed back to the paddock on a flatbed tow truck.) They pitted off strategy and I inherited the lead which I intended to stretch for as long as I could. With so little dry practice time on the course, I had figured that most people would get faster as the race progressed, so I wanted to run away while I had the free space to do so.”

At about the 45 lap mark, during yet another caution period, Johnson called Bell in and this time the car exited the pits down in 16th place. John Edwards then put on a masterful performance making his way to and around most of the competition, eventually getting up to fourth place, which is where the team eventually finished.

Edwards enjoyed the chase despite not having a shot at grabbing the pole in qualifying. He knew that the championship team leaders would be yielding nothing at speed and that meant he and Matt Bell needed to stay sharp at all times.

“As usual, the Continental race provided plenty of entertainment at Lime Rock!” Edwards said. “It was a challenging day for everyone, since the race was the first time anyone had been on the track in full dry conditions. Fortunately, we rolled off with a good car and knew we could be competitive, especially over the longer stints during the race. We didn't quite have the pace of the two Porsches, and Bryan Sellers in the BMW, when we were on cold tires, but five or six laps after going back to green, we started gaining on the No. 83 BGB Motorsport Porsche.

“Obviously they were fighting for a championship,” Edwards continued, “and their driver, David Empringham, was going to do everything he could to keep me behind him. However, he made a mistake and let me get the inside through Big Bend, and then he didn't even turn in for the left hander. I realize he needed to push me off or at least make me lift out of trying to make a move, but in the end it sent him farther off course than it sent me. Fortunately, I only lost one spot while getting pushed off, but made up the spot on Empringham, so I stayed in fourth, which allowed us to move up to third in the championship, and give Matt second spot in the driver’s points standing after the No. 13 car was not awarded points*.

Team Manager Mike Johnson: “We have always run well at Lime Rock, but never great and while we didn't have a winning car, we did have something we could race with all day long. Matt and John both drove a superb race and we led for most of the first half. It looked like a podium was a real possibility until the very end when David Empringham drove John right off the track. I understand why he did it, since he needed to finish fourth to win the championship, but it was still a pretty ugly move. Either way, we were ecstatic to finish third in the team championship, our best ever in the GS class, but the real excitement happened after the race when GRAND-AM disqualified Matt Plumb, moving Matt Bell up into second place in the driver's championship.”

Johnson, Bell and Edwards comments on the 2012 season:

Johnson: “It was a fantastic end to a great season and considering our average finish through the first four races was 13.5, ending up second is a testament to Stevenson's never give up attitude. Right now the team is on the way back to the shop for some well-earned rest then we'll get ready for winter testing and the 11-race 2013 Season.

Bell: “There was a change in the atmosphere this year in the Stevenson GS corral. We started off a bit weaker than we'd like, but by the first third of the season we had invested in an incredible set of guys working as Kaz Technologies. I've joked with them saying they are the best performance upgrade we've ever made to the car. After three years in this program I've witnessed the ups and downs of running a developmental program with a new car. Bringing Tri Gaffney and Jim Kasperzac in was a remarkable enhancement to our efforts. The established engineering and development plan that Kaz brought was the glue that bonded us all together. Everyone slotted into position and performed their role professionally. We evolved quickly and saw our big Chevy hot rod road car turn into a genuinely competitive production race car.

Edwards concluded his comments on the 2012 season by saying, “Congratulations to the team and to Matt for a top three finish in the championship! We made a lot of improvements in the latter part of the year and it paid off.”