Gavin will be driving the No.90 Spirit of Daytona Racing Corvette Daytona Prototype.

It may only be just weeks into the new racing year, but reigning ALMS GT Drivers Champion, Oliver Gavin, is already about to make his third trip over the Atlantic to the USA.

The first two were for tests but it is this third one, to Florida for the 51st Rolex 24 at Daytona, which the Briton considers as key for a super-successful 2013 season.

The Corvette Racing factory driver will be lining up for his 9th attempt for a win and a Rolex watch at the 24-hour endurance classic which takes place on January 26/27 at Daytona International Speedway. 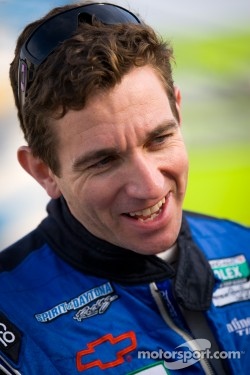 Gavin will be driving the No.90 Spirit of Daytona Racing Corvette Daytona Prototype (DP) alongside SDR regulars Richard Westbrook and Ricky Taylor plus his ALMS team mate, Antonio Garcia.

“I’m looking forward to it a lot,” says the ultra-fit and ever-enthusiastic driver. “It’s going to be one of the best shots for overall victory that I’ve had.

This team is well prepared, having had the car for a season now, and I am driving with three excellent drivers who have a lot of experience in this car. I feel confident we can take a victory.”

Oliver anticipates fierce competition throughout the 24-hour race from the veritable ‘who’s who’ of international racing stars who will be lining up for the start at 3:30 pm (EST) on Saturday, January 26.

Of the 59 entries in the event 17 are from the DP class and 36 from GT, but the four-time Le Mans 24 Hours class winner reckons that the elegant blue Corvette DP will definitely be a strong factor in the bid for winners’ laurels.

“We have strength in depth at SDR, but there are so many great line ups this year – in cars that have the speed and experience to win – that we’re going to need a very special day,” notes Oliver. “We’ll need to have luck on our side though.

As with all endurance races, we have to stay out of trouble, out of the pits and be as consistent as possible. To win this year’s Rolex 24 at Daytona you’ll have to work hard to get through the traffic and really earn the win. That just makes it more rewarding though.”