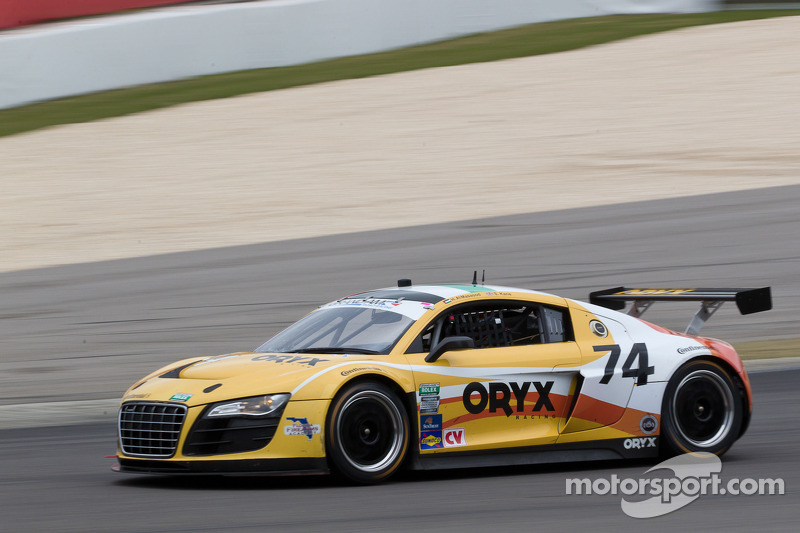 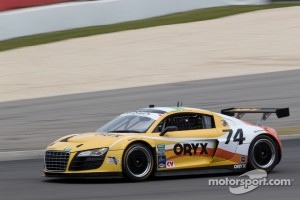 Oryx Racing recorded an unrepresentative 15th placing in the “Porsche 250” today (Saturday 31 March), the second round of the GRAND-AM Rolex Sports Car Series at the Barber Motorsports Park in Birmingham (US State of Alabama).

A handling imbalance frustratingly restricted the pace of the Oryx Racing

Since the team and driver’s GRAND-AM series début at Daytona two months ago, all parties have been busy. Al Masaood won a round of the Maserati Trofeo JBF RAK Series at the Dubai Autodrome while Kane claimed victory in the American Le Mans Series P1 category at the 12 Hours of Sebring.

Oryx Racing’s US operation moved its raceshop to Winchester (US State of Virginia) while the R8 GRAND-AM underwent a K&C Rig Test to evaluate suspension and steering settings. Furthermore a regulation change now allows the Audi to utilise a “competition” clutch – as opposed to the near standard “production” version used at Daytona – and an increased fuel tank capacity by 1.5 gallons.

The next race in the 13-round schedule is at the Homestead Miami Speedway (US State of Florida) on April 29 – a 2.3-mile combined speedway/road course.

But while Al Masaood was content and happy with the Audi’s handling in qualifying, Humaid’s feelings were the exact opposite for his 54mins stint from the green flag – lack of rear end grip heavily restricting the UAE driver’s pace.

Kane took over from Al Masaood during the race’s second full course yellow and resumed 18th – the #74 Audi R8 GRAND-AM going a lap down on the GT class leaders when a misheard radio communication led to Al Masaood mistakenly pitting one lap early with the pits still “closed” while further time was lost when an air jack malfunctioned preventing the team from changing the front left wheel.

With three new tyres and pressures adjusted, Kane was posting times comparable with the top-six in class before the outright race leading Daytona Prototype class car of Memo Rojas forced Kane wide and off the track.

The Ulsterman rejoined without hitting anything but the Audi now had steering damage – Rojas subsequently penalised for avoidable contact for the manoeuvre.

Kane pitted for fuel and tyres from 15th place shortly after the three- quarter race distance, the Audi’s deteriorating handling and a fourth and final full course yellow combining to prevent the Ulsterman from snatching 14th place by just 3.183secs at the chequered flag.

“It was very hot today and we struggled but we finished the race so the reliability is there. There were brief phases when the Audi allowed me to set good, fast lap times before the handling deteriorated rapidly again. Overtaking was difficult with no long straights and no big braking zones. Like Daytona, Birmingham was again completely new to us and the complete opposite of the Florida track with Barber having an undulating nature. The team worked hard on achieving a good balance with the R8 and they did a great job for qualifying. But for whatever reason, the car’s handling was not right in the race – from the start to the finish. Oryx Racing is a great team and everyone is working exceptionally hard on what is a very new GT programme for us, and for that matter, Audi, in GRAND-AM. We knew it would be a steep learning curve but with every lap and mile we clock up, our databank of knowledge increases. It’s a challenge but one that we look forward in cracking as the season progresses.”

“The set-up wasn’t ideal for qualifying but overall I was happy. I only managed seven laps and data showed I was up by at least two-tenth’s of a second on my fastest lap but I spun after pushing too hard on my final lap. It actually marked the first time I’ve ever qualified myself for a race in the US since racing here for almost a year. I was very optimistic for a good race but immediately from the green flag the handling was poor with just no rear grip. I was not prepared to be aggressive due to the unpredictable handling – I’m bitterly disappointed. But it’s a case of each race we are learning about the R8 GRAND-AM and improving. The entire team is working very hard which makes it doubly frustrating and depressing but we’ll go away and come back stronger at Homestead.”

“We went into the race having completed less than 100-laps around Barber and bearing in mind the track was new to our team, both drivers and Audi, I was happy with our progress – until the green flag was waved. Whether it was the heavy overnight rain combined with the increased ambient temperature, the Audi just wasn’t the same car today – it was a frustrating day at the office – but it’s important we keep reminding ourselves that everything is new to us so it will take a little time. Steven was able to set lap times comparable with the top-six at times when the car allowed him to push hard. Since Daytona we’re basing ourselves in the old PTG raceshop in Virginia – the facilities have everything we need. With Humaid living and managing a number of businesses in Abu Dhabi and Steven based in England, we decided to visit the Morse Measurements facility in North Carolina rather than go testing in between Daytona and Barber – perhaps we paid the penalty today – we’re planning to get out for a test before Homestead. The team, which only amounts to seven full-time members and four ‘fly-in’ guys who join us on a race weekend, have all worked hard in a short space of time on this programme.”