MIAMI (March 1, 2002) - Jeff Clinton, 38, of St. Louis, Missouri, was fatally injured at Homestead-Miami Speedway while practicing for Saturday's Rolex Series sports car race. The Archangel Motorsports driver was entering turn one onto the ...

The Archangel Motorsports driver was entering turn one onto the road course section when his Nissan Lola SRPII went into the air flipping several times. According to reports from the track, he was pronounced dead at the scene. 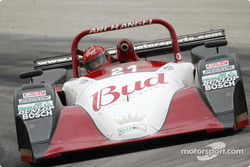 In February, Clinton was classified in the 54th position in the Rolex 24 at Daytona. Prior to the mechanical woes, the team did make it as high as third in class.

Clinton won two SCCA championships, taking the S2000 title in 2000 and the GT-5 championship in 1990. He had three starts in the Rolex Series last year in the Archangel Motorsport Nissan Lola.

Team owner Mike Johnson stated:
"Jeff was a great guy, this was his fifth race with us and we've just always had a lot of fun with him. We're really going to miss him."

Archangel team spokesman has stated that the team will have an official release; however, they are in seclusion at this time.

M.com extends our condolences to the family and friends of Jeff Clinton and to the Archangel Motorsports team.

Homestead-Miami: Doran-Lista on the Pole