The Rum Bum Racing with Audi Sport customer racing made their Daytona debut in preparation for the Rolex 24 at Daytona.

Daytona Beach – Looking to build on the team’s 2012 Championship-winning effort with a strong start to 2013, Rum Bum Racing with Audi Sport customer racing made its GRAND-AM Rolex Sports Car Series debut with the No. 13 Audi R8 GRAND-AM at the Roar Before the 24 test days at Daytona International Speedway over the weekend. 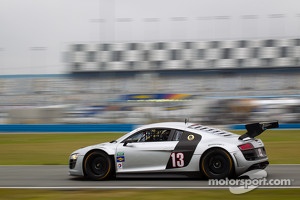 The target for the weekend was to become familiar with the new Audi GT Class entry ahead of the season-opening 24 Hour. With zero mechanical issues to prevent the team from making the most of every session, and with practice times that kept the team firmly in the top- ten on the timing sheets, Luis Bacardi’s Rum Bum Racing emerged from the test with a lot of new data and enthusiasm ahead of the 24.

The weekend produced a full spectrum of weather conditions, as a rainy Friday was followed by a cool and cloudy Saturday, with a healthy dose of Florida sunshine making for a warm Sunday of final practice. The various conditions allowed the team to experience the wide range of weather conditions that could be seen during the grueling 24-hour race at the end of the month.

“We’ve come a long way, very quickly, with this new Audi R8 GRAND-AM,” offered Plumb. “We went from a car that was brand new straight from Germany out of the factory and the car has run perfectly all weekend. I got the chance to drive the car and get comfortable with it, and I’m with a great group of drivers who are familiar with the car, and have a lot of very good information for this effort. All three teams that are running the R8 are working together to get the best possible result for Audi and now we’ve got some notes to work from so we feel like we’ll be as prepared as we can be when we come back in two weeks time.”

With a Series-leading five wins in 2012, Rum Bum Racing made the mid-season transition from a BMW M3 to the Porsche 911 look seamless as the team scored a win in the group’s Porsche debut. After a productive first outing with the impressive Audi R8 GRAND-AM entry, Rum Bum Racing again demonstrated the ability to excel with new challenges.

“Once again our crew has been able to get up to speed quickly on a new car,” said Plumb. “It really amazes me how they respond to every challenge put in front of them. Mr. Bacardi has put an incredible group of people together, and Audi Sport customer racing has a very intelligent and highly talented group of people here to support us.”

Rum Bum Racing will return to the “World Center of Racing” later this month looking to open the 2013 season with another strong performance at Daytona, having won the GRAND-AM opener in 2010 and again in 2011.