The team raced to victory in their debut at Daytona International Speedway with drivers Gian Bacardi and Matt Plumb.

And it took but one race for them to meet that goal as the team raced to victory in their debut at Daytona International Speedway with drivers Gian Bacardi and Matt Plumb. 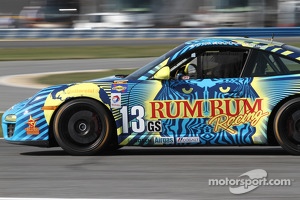 Rum Bum Racing backed their strength on the Daytona banking up once again in 2011 when Matt Plumb and Nick Longhi combined to score back-to-back wins at the “World Center of Racing” for Luis Bacardi’s team.

The team was looking to once again get the best view possible of the track--from the top step of the podium--but had to rally from a pair of significant setbacks to finish in second place, less than two seconds behind the leader after over two hours of racing.

Longhi opened the race from inside the second row after posting the third quickest qualifying time on Thursday and he wasted no time moving forward as he launched the No. 13 Porsche into the lead within just four laps.

The race ran trouble-free until a full course caution was displayed on Lap 10.

As Longhi led the field back to the green, the fan favorite machine was hit from behind and sent spinning as the field sped by. Fortunately, the Porsche didn’t suffer any damage, but there was much work to be done as Longhi had to race his way back into relevance with another charge through the field.

“We were good on the infield, and given any lap time, there’s so much straight here, it’s so difficult, so we had to try so hard to stay around and draft up,” said Longhi of the opening laps. “It’s essentially a drafting contest, and it’s really critical.

And MHP, our spotter, is the best in the business, absolutely, tells me what to do as well. You just do the best you can with what you got and things have to go your way. When I got hit on that restart, I was pretty convinced the car was wrecked, but it wasn’t.”

With 1 hour and 20 minutes remaining in the race, Longhi pitted the No. 13 and handed the controls over to Matt Plumb who relentlessly maneuvered through the combined-class traffic of 69 cars to move his way forward.

Unfortunately, the team would face another setback as GRAND-AM issued a drive through penalty on the No. 13 machine for a pit lane speed infraction.

Undeterred and focused on the big picture Plumb re-entered the track and set a clean and consistent pace behind the wheel of the Porsche as he worked his way from 34th position all the way back into the top-10 in just under 10 laps, though he was far behind the leader.

The race’s third full course caution slowed the field on Lap 53 of the 63-lap race and saw Plumb line up fifth for the final restart after regaining some crucial track position.

The caution period set up a seven-lap run to the finish. Plumb, who was the anchor driver for Rum Bum’s series-leading five victories in 2012, once again gave chase but came up just under two seconds shy of the win.

“We had a bad piece of luck there in the beginning when we got run off the road there at the restart,” offered Plumb. “But the car was good as always, the crew was as good as always, and our pit stops were perfect.

The car was just consistent, and everybody else seemed to be having problems. All the fast cars either broke, or had accidents, or had issues, so we just kind of kept clicking them off and before you knew it, we were back in contention for a podium.

The yellows played to our advantage, and we still had plenty of car. We hadn’t been battling, we just kind of kept it cool and kind of waited to the end. So, a great result from Rum Bum to start 2013, and we’re looking forward to the Rolex 24 tomorrow.”

The result puts the 2012 GRAND-AM Team Champions second in the 2013 standings as Rum Bum Racing opened its season in a big way with the podium result.

“For us, as a team we just don’t get down,” added Longhi. “Things happen. It is what it is. We got knocked back to last place, came back twice essentially, so I don’t know what to say other than ‘thank you’ to the team for preparing a fantastic car.

Joe Varde (Crew Chief) is brilliant at this kind of racing and thank you to Luis and Jennifer Bacardi who put this together and give us the opportunity to do this. There’s just such a great atmosphere and attitude. We never give up and keep coming back.”

Rum Bum Racing with Audi Sport customer racing will make its debut in the 51st running of the Rolex 24 at Daytona with the No. 13 Audi R8 GRAND-AM tomorrow with SPEED carrying live coverage of the event beginning at 3:00 PM (ET).