Orlando, Fla. (27 September 2012) - After nine races, hundreds of miles of hard racing, and countless hours of effort, the difference is just one point. 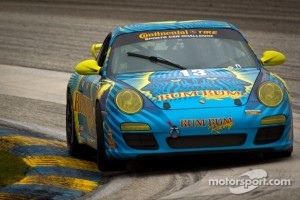 Entering the final round of the GRAND-AM Continental Tire Sports Car Challenge Championship at Lime Rock Park this weekend, Luis Bacardi’s Rum Bum Racing sits atop the Team Championship standings with a slim one-point margin in a championship that will be decided in Saturday’s season-finale event at Lime Rock Park (SPEED, October 14/ 1:00 PM ET).

Rum Bum Racing drivers Matt Plumb and Nick Longhi will pursue the team’s first-ever championship title in the No. 13 Rum Bum Racing Porsche, and the team will pull out all the stops--including the car that won the race in 2011--in an effort to score a maiden championship for the organization.

The GS-only race entry list will be boosted as Jeff Segal and frequent Rum Bum Racing rival Billy Johnson have been drafted to co-drive the No. 3 Rum Bum Racing BMW M3 for the team, which looks to defend its 2011 win at the 1.53-mile circuit.

Segal is a familiar face around Rum Bum Racing. Often called in as a spotter for the team, Segal not only brings BMW experience to the team, but he also has a long working relationship with Rum Bum Racing crew chief Joe Varde. Segal, who will also be looking to lock up the Rolex Series manufacturers championship for Ferrari on Saturday, won the GRAND-AM GS championship with Varde as he piloted a BMW M3 to top honors in 2007.

For Johnson, this weekend will mark the first time that he has spent time under the Rum Bum Racing tent, but he is no stranger to the group as he has been a powerful rival all year long in his Roush-prepared Mustang. An accident at Laguna Seca freed Johnson to race at Lime Rock Park as Roush will not enter the No. 61 machine in the finale.

Rum Bum Racing has delivered impressive performances throughout the year in the team’s third season of GS competition. Plumb and Longhi have four wins, five podiums, and six top-five results in nine races. The strong results have seen the team fighting for a spot in the top-five of the championship runners all year long.

Those efforts, which have seen GRAND-AM add 150 lbs to the Porsche 911 for “competitive balance,” have been helped by some strong up-front performances as the team has led 27% of all the laps run this year, completing 90% of the full season total to date.

But it is the laps that are yet to be run that are the most important.

The team, which has had to fight back from a few set backs--including a 23rd place finish in New Jersey due to a race-ending mechanical failure and a 12th place result at Indianapolis when contact from a competitor took the No. 13 Porsche out of contention for a podium--knows that what happens at Lime Rock Park will be critical.

"We're very happy to have the last race of the year at Lime Rock Park, where we won last last year, and just such a great place" said Longhi. "The racing this season has been totally unpredictable - but we've got to stay on the game plan we've had all year long, which has given us more wins than any other team in 2012. This is going to be a nerve-wracking weekend, but fighting for a championship is something that every driver and team hopes for. We just want to make the most of the opportunities in front of us and execute on the plans that Joe (Varde) and Luis Bacardi have for this group."

Most recently, the team faced frustration at Mazda Raceway Laguna Seca when a curious call from GRAND-AM regarding a restart saw the second place Rum Bum machine given a drive-through penalty late in the race with Plumb and Longhi settling for an 11th place finish.

The Rum Bum squad is ready to rebound as they target the championship win on Saturday and there may be no better place to do it than at the quick 1.53-mile Lime Rock Park circuit. The track serves as the home track for both Plumb and Longhi and both drivers hold years of experience at the Connecticut road course.

Last year the team went to Lime Rock Park victory lane in the team’s BMW M3 after Longhi started from third on the grid. The duo went on to lead a race-high 79 laps en route to claiming their second of three victories last year.

"Luis Bacardi put this entire group together with success in mind, and we are very focused on doing everything possible to win this championship at Lime Rock Park," said Plumb. "Nick and I have worked there as instructors and we won the race there last year so that gives you some confidence. But these GRAND-AM races are so competitive, and there are so many ways to lose, so we know that we have to just stay out of trouble and come home with as many points as we possibly can. It's incredibly exciting for this whole organization and hopefully we can bring back a big result."

The team finished third in last year’s GS championship and would like nothing more than to claim the championship crown this year.