The Grand-Am Continental Tire Sports Car Challenge GS championship team will field both a Porsche and an Audi next year. First 2013 race will be at Daytona.

Rum Bum is Back!

After scoring five wins on the way to the 2012 GRAND-AM Team Championship, Rum Bum Racing will look to defend the Championship with another strong run in the 2013 GRAND-AM Continental Tire Sports Car Challenge.

The team, which debuted at Daytona with a big win for drivers Gian Bacardi and Matt Plumb in the team’s first race in 2010, will see Plumb once again joined by Nick Longhi as his co-driver. The duo will co-drive in their third consecutive year together as they return to the No. 13 Rum Bum Porsche.

This season, I think we will see even more improvement ....

The Joe Varde-led squad claimed the GS championship crown last year after an incredible season that saw Rum Bum Racing win a remarkable five of the season’s 10 races, score a pole position, lead 247 laps, and run out front in eight of the 10 races of the year. After a pair of setbacks early in the season, Rum Bum Racing staged a dramatic rally in the final races to close the year out on top with a victory at Lime Rock Park.

The team, which also just announced that it will debut in the Rolex 24 At Daytona with Audi Sport customer racing, fully expects to deliver another year of positive performances, but also anticipates that the deep talent in the GS field will make the GRAND-AM competition even tougher this year.

“The key to 2013 is going to be consistency and avoiding any kind of mistakes,” offered Plumb, who has shown strength in his dual role as both driver and team manager. “We were fortunate to win so many races in 2012, but I think that at this level of competition it will be hard to match that next year. Every team has continued to raise their game, and things will get even tighter in 2013. In 2012 we were quick, but more importantly we made no mistakes as far as strategy, pit work, and preparation. This made my job as a driver that much easier because all I had to do was not screw it up!”

The team effort that goes into the Rum Bum Racing campaign was reflected in the consistently strong pace that the team demonstrated, even as the group made the mid-season switch to a Porsche. 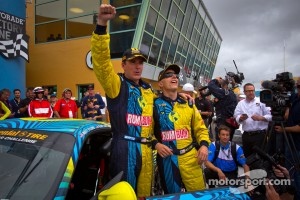 “As satisfying as it was to complete the mission of bringing Luis Bacardi a GRAND-AM Championship, we are all looking to build on that with another strong year in 2013,” said Longhi, who has proven potent as a qualifier having started in the top-10 in every race but one last year.

“This is an incredibly motivated group. We are fortunate to have the support of Luis Bacardi, and it feels like an all-star team that he has put together. It’s not often that you have this kind of championship-caliber group all pushing in the same direction. We know that it will take all of our effort to come back and defend this championship, but it’s something everyone is really looking forward to.”

“This season, I think we will see even more improvement from everyone on consistency and reliability," offered Plumb as he anticipates the upcoming GRAND-AM season. “As much of a nail-biter that the championship fight was this year, I think the fans are going to see even better battles in the races next year and we are working every day to be there to fight for it again in 2013.”