Daytona Beach, Fla. – Rum Bum Racing is taking on a brand new challenge, but the GRAND-AM Champions already seem to have the early lead as the team has released stunning images of the No. 13 Rum Bum Bum Racing Audi R8 GRAND-AM ahead of the team’s official debut next week with Audi Sport customer racing. 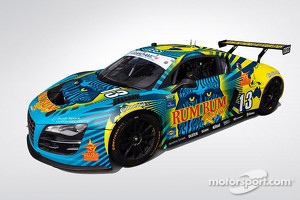 Rum Bum Racing, which won its first-ever GRAND-AM race at Daytona International Speedway in 2010 with drivers Gian Bacardi and Matt Plumb, will eagerly seek the next trophy from the “World Center of Racing” when Matt Plumb is joined by Audi Sport drivers Frank Biela, Christopher Haase and Markus Winkelhock for the twice around the clock classic next weekend (LIVE, SPEED starting 3:00 PM ET Saturday).

“We are really looking forward to the 24--it’s a tough race and this year will be more competitive than it ever has been,” offered Plumb.

“But Luis Bacardi had a big picture plan when he put this team together, and that included constantly finding new challenges--like the Rolex 24-- to take on.

We’ve been overwhelmed with the response we’ve had on Facebook and Twitter with the look of the new car, and I know the fans are going to love seeing it in person.”

Rum Bum Racing will open the Daytona weekend with the first official weekend practice session of the 2013 Continental Tire Sports Car Challenge season on Wednesday, January 23 as the team looks to defend its 2012 Team Championship.