Daytona Beach - In its relatively short history, Rum Bum Racing has shown that when it decides to do something, it usually happens. 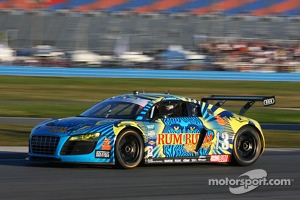 So for Rum Bum Racing’s many fans and those who follow the sport, it was hardly any surprise that in the team’s first-ever entry into the brutal Rolex 24 At Daytona, the No. 13 Rum Bum Racing with Audi Sport customer racing Audi R8 GRAND AM was doing battle for the top step on the podium in the closing moments of the race.

The late race charge was all the more remarkable after the team had lost crucial laps and track position to a pair of significant procedural penalties. But the Joe Varde- called strategy saw the team back on the lead lap, and fighting for yet another victory at Daytona as the world watched.

As the team raced to the checkered flag from second place, the car ran out of fuel, resulting in a seventh place finish for Matt Plumb, Marcus Winkelhock, Christopher Haase, and Frank Biela.

The weekend started out well for Luis Bacardi’s Rum Bum Racing with Audi Sport customer racing organization when Winkelhock qualified the No. 13 Audi R8 GRAND-AM 15th on the 34-car GT class grid. Just 40 laps into the 678-lap race, the GT-1 World Champion had already improved 10 positions to run in fifth.

In a race that saw 16 caution periods, the No. 13 never put a wheel wrong and continuously ran clean and consistent laps around the 3.56-mile speedway road course. Running among the top-10 through almost the entire 24-hour race, Plumb, Winkelhock, Haase and Biele each showed the perfect combination of patience and aggression behind the wheel of the Audi machine.

The announced merger of GRAND-AM and ALMS has many looking forward to the future, but the early integration of a new and revised rules and procedure package ultimately cost the team a great shot at a win, as the team fell afoul of a pair of procedural penalties, which came with them significant time penalties.

“Our radios weren’t working properly throughout the whole race,” offered Plumb. “I think there was a little bit of a language barrier between ‘Rum Bum speak’ and ‘German speak’ and the communication got a little tangled at one point in the middle of the night. We just had a miscue with the pace car-once where we didn’t pass it when we should have...and then, later in the race-we got penalized because we passed the pace car when we shouldn’t have! So we lost time with those penalties, but Joe (Varde, Crew Chief) came up with a scenario where we had a series of smart gambles on how to get the laps back.”

The race pace was slowed for a lengthy caution period Saturday morning around 7:00 AM when heavy fog enveloped the circuit which forced the field to circulate behind the pace car for 1 hour and 40 minutes. But once the fog lifted, it was back to high-speed running and the fan-favorite No. 13 led the GT class to the green.

Into the closing hours of the race, the Rum Bum Racing with Audi Sport customer racing Audi R8 GRAND-AM looked well-poised for a sure podium finish but the team knew the No. 13 would be close on fuel in the final run to the checkered flag.

“Joe (Varde) called some strategies and they all worked, and before you knew it we were on the lead lap but then we had to figure out how we were going to make it fuel wise,” offered Plumb. “How it worked out we would have had to stop and fuel and would have finished seventh. As it turned out we still finished seventh but at least we made a go of it.”

The challenge of taking on not only a new category, with a new car, in one of the greatest racing challenges in North America with a new and unfamiliar partner like Audi Sport customer racing, was in the end, just another day for Rum Bum Racing. While the effort didn’t result in the win that the group had been targeting, it was a strong demonstration of just what Rum Bum Racing is capable of.

“We had a language barrier but I don’t think we had any communication issues,” said Varde. “We knew what we were talking to each other about, there were just different ways to get there. They (Audi Sport customer racing staff) were great guys to work with and they are going to be my lifetime friends now. Anytime you can do that is something special. We were going to finish seventh, or win, so it was an easy choice.”

Ferrari on the podium at the Daytona 24 Hours