The end of the 2012 GRAND-AM Rolex Series season also marked the end of an era in Mazda racing. This weekend’s race at Lime Rock Park was the final professional event for SpeedSource with the Mazda RX-8 GT car. Since their introduction in 2007, the SpeedSource built cars have achieved every measure of success including 18 race wins, numerous pole positions and the 2010 Grand-Am GT Championship. Two of those race wins came at the grueling Rolex 24 at Daytona.

The #70 Castrol ModSpace Mazdaspeed RX-8 GT closed out the 2012 campaign with an 11th place finish at the GRAND-AM Championship Weekend. The series finale featured a short, two day format with qualifying and the two hour, forty-five minute race on Saturday. The weekend got off to a good start for the SpeedSource team, setting quick times in practice. SpeedSource driver Sylvain Tremblay suffered a crash in qualifying, but not before setting the fourth fastest time. The top-caliber SpeedSource crew was able to repair the front end damage with time to spare before the race start. 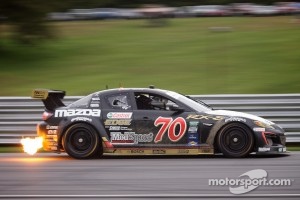 Trouble would strike again, however, just before the green flag fell. An off-track excursion on the warm up lap left the #70 Mazda trapped in the wet grass. The race started under caution due to the incident. Tremblay was able to rejoin the race with little mechanical damage, but lost a lap in the process. To make matters worse, GRAND-AM incorrectly scored the car two laps down. Regaining the lost time would prove difficult on the tight, 1.5 mile course.

Tremblay worked up to 13th place before handing the car over to Jonathan Bomarito.The team gained another position before being punted off track by a fellow GT competitor. The contact sent the #70 nose first into the Armco. The impact caused significant driver’s side bodywork damage. A brief stay on pit lane was required to remove both left side doors before Bomarito could return to the track. Once back on course, he continued running consistent lap times and benefiting from other team’s misfortunes. The #70 Castrol ModSpace MazdaSpeed RX-8 GT car would take the checkered flag in 11th position.