Ricky Taylor and Richard Westbrook looking forward to the first Grand-Am event at the Circuit of the Americas.

Daytona Beach, Fla. – Spirit of Daytona Racing will return to GRAND-AM Rolex Sports Car Series competition this weekend for Round 2 of the 2013 Championship at Circuit of the Americas (COTA) in Austin, Texas. The GRAND-AM of The Americas presented by GAINSCO and TOTAL event marks the series’ debut at the picturesque Texas road course and is the first of three new track additions to the 2013 schedule as the series continues to grow towards the future. 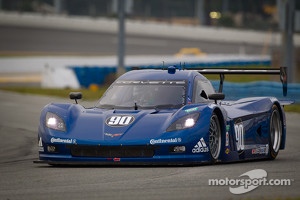 Drivers Ricky Taylor and Richard Westbrook will team in the No. 90 VISITFLORIDA.com Chevrolet Corvette DP which will once again proudly carry the colors for VISITFLORIDA.com.

Coming off the team’s best Rolex 24 Daytona Prototype finish of fifth last month, Spirit of Daytona is eager to return to race action at the 3.4-mile, 20-turn Texas track with hopes of taking the No. 90 VisitFlorida.com Corvette DP to victory lane and becoming the first GRAND-AM winners in the highly anticipated event.

“We’ve got the 24 behind us, so it is a little bit like a brand new season now with these shorter races,” said team owner Troy Flis. “It’s really exciting for the series to be heading to a new track and of course the engineers --and the drivers--have a pretty good challenge to learn this place faster than everyone else does. The biggest thing for us is to not only be focused on a quick car, but also being there at the finish. We know that to be the kind of factor in this championship that we want to be, we need to consistently get as many points as we can out of every race weekend.”

Spirit of Daytona showed strong pace in the season opening event at Daytona International Speedway last month and despite several setbacks throughout the 24-hour endurance race, showed guts and determination in a late race rally to a fifth place result. A range of issues including malfunctioning dashboard lights, a battery charge problem, and a dragging exhaust bracket kept giving the team new challenges to take on, but perseverance paid off when the No. 90 machine returned to the lead lap in the final stages of the race to take fifth at the finish.

Though the team will have just two days to prepare for GRAND-AM’s inaugural COTA event, Spirit of Daytona will look to utilize that precious track time and gather valuable data in order to take what they learn and convert that into a victory in Saturday’s 2.75-hour race.

“It’s very exciting for us to be taking on a new track and hopefully it will suit our Corvette DP,” said Westbrook, who caught a flight home immediately following the Rolex 24 in time to join his wife Jess for the birth of their daughter Amelia. “Even though there were some challenges along the way, we left Daytona with some solid points, and now it’s time to hopefully build on that with some strong results in these sprint events.”

“Circuit of the Americas looks amazing and all the drivers were very positive about the track, so it’s something I’ve been looking forward to for a long time,” added Taylor. “I live in Florida, so I’m happy to have VISITFLORIDA.com back with us again and hopefully we can learn a lot and come home with a competitive result this weekend.”