Team owner Troy Flis said "I love the race track. I’ve driven there myself so I’m really optimistic about going there."

Daytona Beach, Fla. – Whether it is developing a new chassis for competition in the Rolex Sports Car Series or taking on a new race track, Spirit of Daytona Racing is always up for a new challenge. 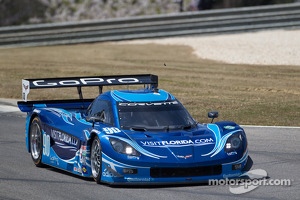 And with GRAND-AM making a historic debut at Road Atlanta this weekend, the team is looking forward to bringing its winning ways to a new facility. The Grand Prix of Atlanta marks the first time that the Daytona Prototypes will see action at the 2.54-mile track, which lies just down the road from Atlanta and boasts a rich legacy with decades of racing history.

Spirit of Daytona Racing drivers Richard Westbrook and Ricky Taylor will partner in the No. 90 VISITFLORIDA.com Corvette DP this Saturday (live broadcast: SPEED, April 20 4:30 PM ET) as GRAND-AM stages round four of the 2013 Rolex Series championship.

“I’m very excited,” offered team owner Troy Flis about the Rolex Series debut at the facility. “I love the race track. I’ve driven there myself so I’m really optimistic about going there. It’s a cool place. Richard (Westbrook) has a bunch of time around there and Ricky (Taylor) has some time around there as well. It’s going to be fun because none of these cars have ever been around there before. So I’m going to give a lot of credit to my engineer to be on his game and make sure we roll off the truck pretty good and if that happens then we’ll have a good day.”

“I think this weekend is exciting for several reasons,” said Taylor, who is in his first season with Spirit of Daytona Racing. “As a driver, this track is such a rewarding place to race. You have some very fast sections as well as some places where being technically strong is also important. It is just one of those great tracks we are fortunate to have in this country. And as a fan of the sport, it is exciting to see how the merger is creating opportunities like this, for us to get the chance to race at Road Atlanta in a Daytona Prototype. So we are all really excited.”

The track is one that drivers relish. With some very challenging sections, many of which reward courage and familiarity in equal measure.

“I think it’s the first time that we're going to an ALMS track - to a track that I know from just driving a GT car and then going into it with a Daytona Prototype which is really exciting,” said Westbrook, who won the ALMS opener with a triumph for Chevrolet in the Sebring 12 Hour race. “I have to say I think it's one of the best tracks in the states without question. I think it will really suit the DPs. It will be a really, really exciting lap. It's a very, very fast circuit. We are all going into the unknown but it just feels very exciting to go to Road Atlanta and it just makes you think why we've not been there before. But it doesn't matter now because we're going there and we're going to be there to stay.”

That previous experience at the track is something that is driving Westbrook for a strong result this Saturday afternoon.

“Last year at Petite Le Mans we were leading comfortably and then we had a problem with the steering rack with two hours to go so I'm really desperate for a good result there,” said the Briton. “As far as the track is concerned - the section 4A-4B-5-6 -the esses, is just so challenging because you turn in blind and it will be flat in a DP. But it's only flat if your brain knows when to turn. Everything is done on muscle memory there. It just takes time. It's not a straight forward track. It's such a challenge and it's going to be fast in a DP.

The team recently took advantage of a gap in the schedule to bank some testing time, something that Taylor is looking to put to good use as the team engineers target a fast start to the weekend.

“That is another reason to be excited--we will all be starting with a clean sheet of paper and empty notebooks for this track,” said Taylor. “Some of the guys who have run here before have done so in other cars, so we are all going to be racing to learn as much as we can with our Corvette DP as quickly as we can. The VISITFLORIDA.com car has been strong everywhere we’ve raced so far this year, so hopefully we can come off the trailer quickly, and just keep improving right through to the race.”