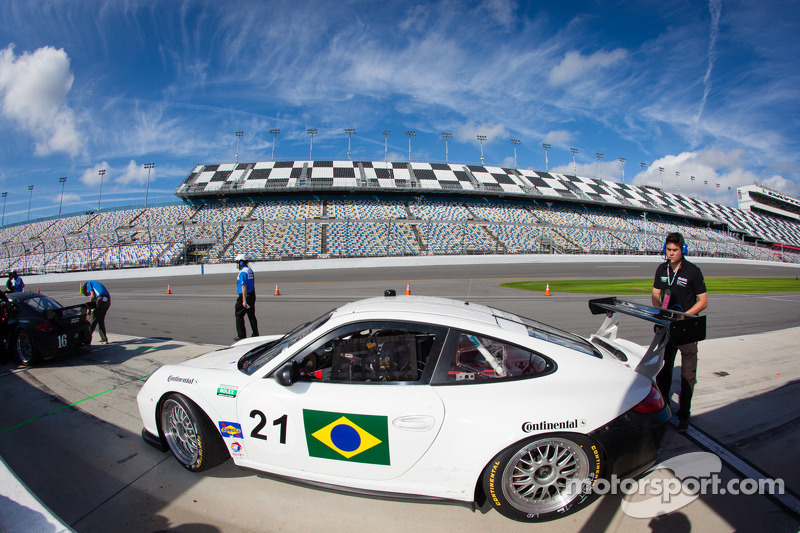 The all Brazilian team in the #21 Dener Motorsport Porsche GT3 is ready to take on the rest of the world in Daytona drivers Barrichello, Kanaan, Giaffone, Mauricio and Figueiredo.

Daytona Beach, Fla. – Brazilian aces Rubens Barrichello, Tony Kanaan and Felipe Giaffone comprise an all-star cast in this weekend’s Rolex24 at Daytona. They are joined by stock car drivers Ricardo Mauricio and Nono Figueiredo. The quintet is driving a Porsche GT3 Cup for Dener Motorsports in the GT class.

“When they said it was going to be a total Brazilian team, including cars and mechanics, I was up for the challenge,” Kanaan said. “All of us are good friends and for some of us, we go back 25 years. We knew we were going to have a big challenge and we are struggling a little bit. It will be our first 24-hour race, and it should be a lot of fun.”

They came along and offered me the ride, so I took it.

Looking ahead to the upcoming IZOD IndyCar Series season, the flashy driver said, “I can’t wait to get back in the car. I haven’t driven a car since the season ended, but I will be back in a car next month during testing at Sebring. To get ready for the season, I am working out and talking to my engineers twice a week as search for more speed in the car. We were pretty competitive last year, and we just have to be more consistent.”

Barrichello enjoyed racing with the IndyCar Series in 2012 after a lengthy F1 career, but he will not return in 2013, as funding wasn’t available. Working with others, Barrichello said they tried to put a program together for the upcoming season but didn’t succeed. Instead, he’s returning to Brazil to race stock cars, a situation he sees as a win-win – racing at home and being near his family. “They came along and offered me the ride, so I took it,” he said. He will be driving a Peugeot in Brazil’s Stock Car V8 Series.

Since leaving IndyCar, Giaffone has been racing trucks in Brazil and has excelled with his craft. “The trucks are pretty big, just like a semi, and truck racing has become pretty popular in Brazil. I have driven for Volkswagen for five years and I have won three championships, so the change has been good to me.”

Giaffone also tests stock cars in Brazil but doesn’t race them. But he said the stock cars are similar to the Porsche he’s driving this weekend. “When Rubens and Tony invited me to join them, I jumped at the chance.” 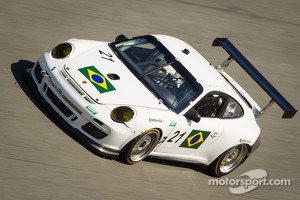 Although Giaffone doesn’t race in IndyCar any longer, he’s covers the open-wheel series as a color commentator for Brazilian television. “I miss racing in IndyCar, but I have a lot of fun with the television. And I don’t have to worry about being in shape.”

Giaffone’s only exposure at Daytona came in the IROC Series several years ago.

The Brazilian team knows it is in for a formidable challenge this weekend, but they are looking to learn together and have fun in doing so.