The 2012 GRAND-Am Rolex Series finale took place this past weekend at historic Lime Rock Park in the northwest corner of Connecticut. In the late stages of the race, a hard charging Robin Liddell – driving the No. 57 Stevenson Motorsports Chevrolet Camaro GT.R - kept the pressure on the race leading No. 44 Magnus Porsche, driven by Andy Lally, over the final few laps. Wary of his ability to complete the race on fuel, and hoping to have the opportunity to throttle back and conserve the precious liquid, Lally instead had to stay on the gas pedal to keep Liddell at bay. In the final laps, however, the last of the octane content in his tank went away and this allowed Liddell to get by for the win. 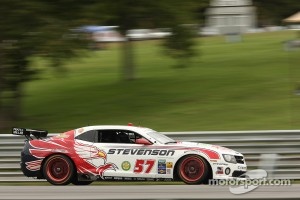 The terrific result at this 1.5 mile bull ring put driver Robin Liddell* in second place in the Driver’s Championship and the Stevenson team in second in the Team Championship. (*Liddell’s co-driver John Edwards had to miss several races this year due to an injury.)

The great results started early with John Edwards capturing his fourth pole this season, an achievement that was recognized with his receiving the “Pole Award” at the GRAND-AM season-ending awards banquet that followed on the Monday after the race.

Edwards was quick to acknowledge his achievement came as a result of a team effort to give him the best car possible for his best laps possible.

“The Stevenson crew and engineers did a fantastic job,” Edwards noted, “which has just become normal over the course of this year as they've executed races very well whether we were in contention for a win or just trying to salvage points. A big thank you is also owed to John and Susan Stevenson, who have put together and supported a fantastic group of people in the Stevenson team.”

The race had its share of drama for the Stevenson crew. For starters, the team experienced a lengthy pit stop to deal with difficult lug nuts. By the time the problem was resolved, the No. 57 Camaro came out of pit lane in eighth place. In addition, there were a number of caution periods which always wreak havoc with strategy. And during the race, Liddell was a first-hand witness to an accident that almost invited him to participate.

Liddell: “Lime Rock always invites trouble in multi class racing so when I saw an Audi spinning ahead of me soon after we went back to green. I just braked and waited to see where he was heading. Unfortunately for the No. 59 (Brumos Porsche) and the No. 94 (Turner BMW) they got tangled up in that crash so that took out part of our main competition for 2nd in the championship.”

Liddell kept charging ahead after the lengthy stop and the near-miss wrecks and he soon found he had worked his way back up near the front. Mike Johnson then applied a new dose of strategic acumen to the battle bringing the car in for fresh tires and fuel with about an hour and 20 minutes left in the race. His decision came when it became obvious the No. 44 Porsche and the No. 63 Ferrari were simply faster than the Camaro. The plan then was to come in off schedule and put on fresh rubber for the middle stints.

This worked out to the team’s advantage as the Porsche and Ferrari would come in for their pit stops a short time later allowing Liddell to move up into the second spot while they were off track. Johnson had the car come back in again with 45 minutes to go which meant they would not have to stop again. When the final yellow caution period took place, they made up about 30 seconds on the top three cars.

John Edwards was in the pit box watching the final moments of the race unfold with Liddell chasing the No. 44 Porsche in dogged pursuit of a win.

Edwards: “That was an intense ending to the GT race! We knew the Magnus car was low on fuel, so Robin was doing everything he could to pressure Lally into pushing hard rather than saving fuel. Fortunately, it worked with a few laps to go and Robin passed Lally to bring home the win. It was a great drive by Robin after over two hours in the car at a track that really doesn't give you a break.”

While Edwards had a great seat to watch the action from, Liddell had an even closer view of the excitement in the final run to the flag.

Liddell: “I had a good close battle with Lally but the Porsche was quite a lot faster on the straight so passing was always going to be really tough. I got halfway alongside once or twice but we only had minimal contact; it was very clean. What a fantastic way to end the season getting the third win for Stevenson Motorsports in our Chevrolet Camaro! John did a super job as always to grab the pole and led the race comfortably early on and although we had that long first pit stop we were able to come back and take the win. After some spot-on strategy calls from the pits, in the end we were chasing down the No. 44 Porsche for the win, all the while knowing they had to be tight on fuel. With a late race caution we closed right up and then just pressured them as hard as we could knowing that they would be trying to save fuel. Sure enough with two laps to go Lally stumbled and I was able to go by and take the win.”

Mike Johnson expected some late race drama between the Porsche and the Camaro and he was relieved to see that the drama played out in his team’s favor.

“We were surprised the No. 44 didn't pit within the last 50 minutes because they easily had the pace to win.” Johnson commented. “When it got down to the final few laps, we were shocked to see the car still running, and were even worried Robin might hit it if it ran out of gas, but just like Montreal in 2008, the leader tried to go a bit too long on fuel and we crossed the line in first with a few gallons left in the tank.”

“Overall, this was a superb result,” Liddell continued, “and I really can't thank the team of guys enough for an outstanding job this season and especially to Johnny and Susan who again have shown their dedication and support to this race team which makes this organization undoubtedly the best in the business!"

Johnson: “It's always great winning the last race of the year, because you get to carry the feeling through the winter. The team performed flawlessly all season long and without a few incidents in the middle of the year, we might have been GT Champions. It's been so great having the unconditional support of John and Susan Stevenson combined with the engineering and marketing capabilities of Pratt & Miller and GM Racing. I'm sure the guys will take a few days off before we start working on 2013."

Team owner John Stevenson has fielded cars in the GT Class of the GRAND-AM Rolex Series since 2003. His affection for what Team Manager Mike Johnson, Crew Chief Michael Hoffman, his drivers and the entire Stevenson crew and support staff has accomplished is evidenced by his comments on the season presented here.

“This year was both challenging and frustrating when you consider the rules and questionable officiating that dominated the season.” Stevenson said. “Despite the obstacles however, this team never quit putting forth 110% until the last lap and the checker was flown in every race. Our entire organization performed nearly flawlessly for the entire season. Mike Johnson continued to show his strategic abilities to call races from the box as evidenced in this last race of the season. Our Crew Chief, Michael Hoffman, and his entire crew did an awesome job for us all season long. Once the Chevrolet Camaros hit the track, Robin, John, Ronnie and Matt all performed at peak levels every time they got behind the wheel for us.

“I feel the same sense of appreciation for our partners at GM racing.” Stevenson continued. “Our Chevrolet Camaro was the perfect car for us on balance considering the different track layouts we visit. We cannot say enough about how well Chevrolet was there to support our efforts this season and how much we appreciated them and the great car they produce. Thanks also go to our Katech engines that never missed a beat all season, and our engineer, Ben Johnson, from Pratt and Miller. All told, I could not be more pleased with how everyone worked so hard to get us so close to a championship.

Dakota Mamola: Biding his time behind the scenes of MotoGP