After two disappointing results in the previous two events, the Kansas victory was a welcome result for the Stevenson Motorsports team.

Kansas City, Kan. – Stevenson Motorsports claimed the team’s second win of the season in GRAND-AM Continental Tire Sports Car Challenge competition on Saturday as Matt Bell and John Edwards combined to lead a race-high 27 laps in the No. 9 Camaro GS.R en route to victory at Kansas Speedway in the SFP Grand Prix. 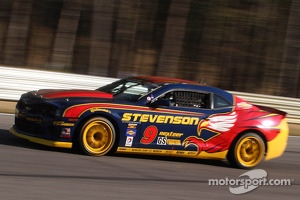 The result marked the team’s fourth podium finish this year.

Heading into the Kansas Speedway event for Round 9 of the championship, Bell and Edwards sat second in the point standings after finishing among the top-10 in the first six races of the season.

After two disappointing results in the previous two events, the Kansas victory was a welcome result for the Stevenson Motorsports team. "This was such a team effort,” said team manager Mike Johnson. “This track is so unique and it really doesn't suit our car, but Ryan McCarthy, our engineer, and Chris and Carter and Grant came up with stuff we had never done before in this car to make it work and we got it working really good around the oval.”

Bell started the race from fifth on the grid and delivered a strong opening stint – progressing up to second as he reported that his Continental Tires were wearing evenly and performing well. Bell took over the lead just prior to the team’s first pit stop in which he brought the No. 9 Camaro to pit road for routine service and a driver change as Bell turned the controls over to Edwards.

A full course caution was displayed on Edwards’ out lap with the field bunching back up and the No. 9 Camaro restarting second in line. Edwards would run among the top-three throughout his entire 1 hour and 40 minute stint. The Stevenson Motorsports team called him to pit road for fuel only during the race’s second full course yellow with about 1 hour and 20 minutes remaining.

He emerged second in line and took over the point during the race’s third full course caution period. Once back to green flag running, Edwards defended against the championship-leading car of Rum Bum Racing while putting a bit of a gap over the second place car.

Edwards looked well on his way to victory as he stretched the leading margin but a late race caution with 17 minutes remaining in the race set the stage for a final three lap green flag run to the finish. As Edwards took the green flag on the final restart, he defended masterfully against the championship-leading Porsche to take the win.

“The car was great,” said Edwards from victory lane. “I don’t think we expected this to be a great track for the Camaro, but that didn’t stop us from really focusing on the set up and just trying to make the car as good as we could make it. I think we had one of the fastest cars.

I think we probably weren’t as fast as the 13 car but ultimately Matt (Bell) was faster than (Rum Bum Racing’s) Nick Longhi in the early stages and did a good job to get by him. So that move early in the race even though this is an endurance race, really played a key part in the end because I was in a position to defend against the 13 instead of trying to get around it.”

Ryan nailed the set up. My stint was mostly on my own which really highlighted what the team did with the car. John had a lot of battling going on and I think he did a very good job with that. It’s not an easy task keeping Matt Plumb behind you. I’m very impressed with everything the team has done this weekend.”

The victory sees Stevenson Motorsports remain second in the championship, improving their margin over the third place team by 26 points.

“We never expected a finish like this,” added Johnson. “Really the credit goes to the team for making a car that was kind of unconventional to do kind of what it isn't supposed to do. It is just such a great result for the team and I am really happy. If this can help secure second place for us in the championship with two more races to go, that is great."

The team will be back in action at Laguna Seca September 7-8.

Top-5 finish in no. 96 GS class M3 for Auberlen and Dalla Lana at Kansas