Fords, Mazdas sweep qualifying in Daytona Fords swept the top-three starting positions Thursday in qualifying for the 48th Rolex 24 at Daytona International Speedway. Max Angelelli led the way, claiming the pole with a time of 1:40.486 behind the ...

Fords swept the top-three starting positions Thursday in qualifying for the 48th Rolex 24 at Daytona International Speedway. Max Angelelli led the way, claiming the pole with a time of 1:40.486 behind the wheel of the SunTrust Racing Ford Dallara. Michael Shank Racing's Ford Rileys qualified second and third, with Oswaldo Negri edging Michael Valiante for the outside pole. 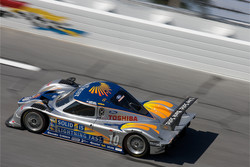 "It was important for us [to win the pole]," explained Angelelli, a former Rolex 24 winner who will share the driving duties in the race with Pedro Lamy, Wayne Taylor, and Ricky Taylor. "It was nice after everything we went through last year, losing the championship in the final race. It is good for morale and it's good for everybody. And we want it badly.

The top-five qualifiers were separated by less than a second.

The Gainsco Bob Stallings Racing Chevrolet, last year's Rolex Sports Car Series championship wining car, did not participate in qualifying due to damage sustained in a crash during practice Thursday morning. Nascar champion Jimmie Johnson was driving at the time of the crash. He was not injured but the car suffered heavy damage, which the team hopes to have repaired by Friday.

Two other Daytona Prototypes are entered in the race but neither took part in qualifying.

Mazdas recorded the three fastest times in GT class qualifying, with Jeff Segal winning the pole in the SpeedSource Mazda RX-8. Jordan Taylor was second fastest in the Racer's Edge Motorsports Mazda, followed by Sylvain Tremblay in a second SpeedSource entry. "I can't think of a better way to start the weekend," said Segal. "The Mazdas have always been strong at Daytona and it's a really great track for us. We're happy with two Mazdas on the front row. We worked hard in the test days to make sure our car was good for the race and we think it is."