Next up is Round 7 at Indianapolis Motor Speedway on July 26.

Watkins Glen, NY - It ended as a day of celebration all-around in the Fall-Line Motorsports camp as their three BMW M3s finished in the Top-4 with Bryan Sellers and Mark Boden taking the victory in the GS category of the Continental Tire 150 At the Glen and teammates Hugh Plumb and Al Carter finishing 3rd while Charles Espenlaub and Charlie Putman brought home 4th. 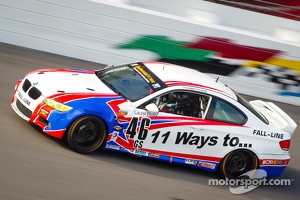 It was a monumental moment for Sellers and Boden, as this was the first win for the #46. The track conditions during the 2.5-hour race were treacherous, changing rapidly as pockets of rain moved in and out of the area several times. Over the course of the 3.4-mile, 11-turn track, there were times when parts were completely covered in water and parts completely dry.

It was a tough race for engineers and drivers alike and making the call on strategy and tires had to be made numerous times during the race. Sellers chose to stay out on slicks during the last caution, not knowing if the track would go back to green. He sat P2 behind the #13 Rum Bum Racing machine of Nick Longhi and Matt Plumb.

They were also on slick tires, but as it became clear that the race was going to go back green for one final lap, Sellers expressed his concern about the track conditions. The backside of the track was pretty wet and the dry line was not clearly defined but Sellers took the lead from Plumb right at the green flag and held him off for one of the most heroic laps ever. He crossed the finish line P1 and captured the precious first victory for team owner Mark Boden and his first in the Continental Tires Sports Car Challenge series.

Hugh Plumb and Al Carter returned to the podium with a strong 3rd place finish for the first time since March of 2012. Al Carter drove a hard first stint, moving up to 3rd from his 8th place starting position when he handed it over to Plumb. The #45 was on a different strategy than the #46 and #48 cars and in order to make the race without any additional stops other than for a driver change and top-off of fuel, they needed an extensive caution period and/or the skies to open up.

They got both. Just before the final caution, Hugh was able to pit and made the decision to switch to rain tires as the skies opened up. The pits were closed shortly after Hugh's stop as the track went full course caution due to a number of cars off-track and in the barriers. Teams knew the caution would be a long one with so much clean up on the course.

Hugh was the first car on rain tires, and with one lap of green flag racing for the final lap, he has a short amount of time to pass cars. He got around teammate Charles Espenlaub early and was closing on his brother Matt Plumb at the checkers. Had there been one more lap in the race, the #45 car would have most likely taken the victory. Nevertheless, it was a great day for the #45 and the pair broke their streak of bad-luck with this return to the podium.

Rounding out the Top-4 in today's race was the #48 driven by Charles Espenlaub and Charlie Putman. Putman drove an impressive opening stint and opened it up for Espenlaub to make quick work of the remainder of the field as he pitted in 8th. The #48 was on a similar strategy as the #45 but Espenlaub did not pit for rain tires during the final stop.

He tried to hold off teammate Hugh Plumb but the combination of a wet track and slick tires was too much for the #48 and he settled for 4th. It was a great points day however, and Espenlaub moves up to P4 in overall standings.

Bryan Sellers: "It is such a big win for so many reasons. We have been so close so many times and for so many reasons just had things go askew. We've never been able to convert on our speed and how good the team really is. Today things finally went our way and we were able to turn one into a win.

Before we went green, I really didn't want to go green at all. I was happy in that moment to take 2nd place because the conditions were not good and I was on slicks. It was a difficult situation but as soon as the pace car lights go out you have to change your mindset and I thought, 'our only option here is to win,' so we might as well try.

I am so happy for Mark. He puts so much into the program; he loves it, and it's so great to be with him and to give him that win. That's the most important thing- that I was finally able to bring one home for him after all the faith he has shown in me. It's just a great day."

Mark Boden: "So often we roll the dice and you fall short. Sometimes you roll the dice and its pays off. Thus was a huge payoff. The team did a great job, great decision-making and Bryan (Sellers) did a phenomenal job bringing it in on the final lap."

Al Carter: "Wow, what a race at Watkins Glen, an unbelievable team effort; a little bit of luck to get the 45 up on the podium. We ran really well early on and, Hugh brought it home. It was really exciting and rewarding, we work so hard at Fall-Line and to get a podium for the crew, it was really special."

Hugh Plumb: "I am really happy for Fall-Line Motorsports, Al (Carter), and the B+ Foundation for a third place podium that we have worked so hard to get. We had a clean race, for the most part and I was on rains while everyone else was on slicks due to a good strategy by (engineer) Chris Lerch. I just want to thank everybody at Fall-Line and let's keep this momentum going."

Charles Espenlaub: "It was a great day for Fall-Line, with all three cars in the Top-4, congrats to Mark and Bryan. It was just a great day all around. The adverse conditions took out some of our competition, but everybody at Fall-Line worked hard and the results show."

Charlie Putman: "Anytime you come away with three cars in the top-4, you've got to be happy. We had some extreme strategy going on with two of the cars (#48 and #45) but it was an extreme day with some strange conditions and it played out in our favor. Sometimes you take those chances and they don't work out, and we knew we needed to take them to do well here today. And they just played into our hands. When you get those chances, you take them. That's racing."

Michael Harvey, Team Manager: "What a great day for Mark and the Fall-Line Motorsports BMWs. We have been fast all year and today we also had a little luck. Bryan, Hugh and Charles drove brilliantly and I am sure that last lap will remain with Bryan for a while. The Fall-Line crew has never given up so this result is for them and the partners who have supported and encouraged us for the last 3 years. We now look forward to Indy where we came close to victory last year."

Watch the replay of the race on SPEED, Saturday, July 6 at 4p. ET. Next up is Round 7 at Indianapolis Motor Speedway on July 26.

Edwards and Liddell win on GT class at Watkins Glen