When Ryan’s full-time ride fell thru mid-season last year, Glenn quickly signed him to be his closer for the remainder of the season, a position that was open due to an unfortunate injury to Taylor Hacquard. 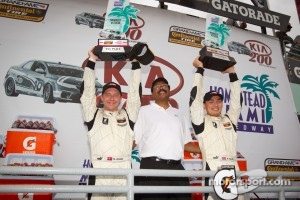 Ryan responded by regularly placing the #30 at the top of the CTSCC field, including a near-victory at Indianapolis.

Team owner Glenn Bocchino commented about the signing, “Ryan is a very impressive young driver, he is usually among the fastest drivers on our team and rarely makes a mistake. The kid has proven he is the real deal!”

Ryan commented, “The second half of last season I learned first-hand what a great team Glenn had assembled here at i-MOTO Mazda. There was never any doubt in my mind that I wanted to return there for 2013”.

Come visit the team at the Daytona International Speedway January 4th - 6th 2013 at the annual Roar Before the Rolex 24 test week.

Insight: The full story of why Verstappen switched F1 helmets