Tim Bell will team with BJ Zacharias in the GRAND-AM Continental Tire Sports Car Challenge ST class. Their first challenge will be at the Daytona infield road course.

The 2013 season will mark Bell’s third full year of professional racing and his second year with the Ohio-based team. Bell spent his rookie season in 2011 driving Kevin Doran’s BMW 128i in the CTSCC Street Tuner Class. 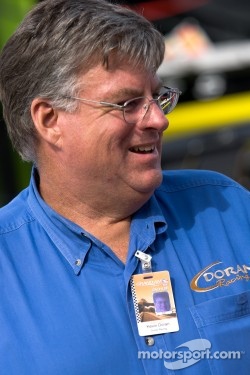 The upcoming season will also mark the second year of the Nissan 370Z in Grand-Am competition, following a solid first year where the 370Z showed great speed but didn’t capture a win due to a string of bad luck.

Landing the opportunity to drive the 370Z and race a second time for Kevin Doran is something the 23-year old finds quite exciting.

“I’m really honored that I will once again be driving for Kevin Doran and sharing the car with my good friend BJ Zacharias.

Two years ago, when I made my debut in a BMW 128i, Doran Racing gave me a very strong car and we had the results to show for it.

Now that Kevin has partnered with a manufacturer that has its roots firmly planted in motorsports, I know the #14 Nissan 370Z will be a very competitive machine. It’s great to have this opportunity to race with an outstanding team and co-driver.”

Bell also explained what he saw Doran Racing achieve last year on the track with the Nissan 370Z, as well as his outlook going forward.

“Doran Racing had great results last year, and I can’t wait to show the world and my fellow drivers in Grand-Am what Nissan, Doran Racing and I are capable of delivering!”

Kevin Doran echoed Bell’s sentiments. “I’m excited to be working with Tim Bell, BJ Zacharias and Nissan for the 2013 season.

It’s great to welcome Tim back into the Doran Racing family, and I believe that having Tim and BJ as co-drivers gives us a strong shot at the 2013 Championship. This was a great Christmas gift for all involved and I can’t wait to get the season under way.”

Bell and Doran Racing will be on track together January 4th through the 6th for the 2013 Grand-Am Road Racing Roar Before the 24 at Daytona International Speedway. Stay tuned for updates!