Top-five CTSCC finish for Burrows and Mason at Road America

The Compass 360 Racing crew now looks to carry this hard-earned positive result into the final three races of the season, starting next weekend at Kansas Speedway.

Elkhart Lake, Wis. – Adam Burrows and Ray Mason scored their best finish of the 2013 GRAND-AM Continental Tire Sports Car Series to date as the duo combined for a run to fifth place in Saturday’s Road America 250 for Compass360 Racing.

The championship-caliber squad predicted a race littered with yellows. That prediction proved wise after the very first lap of the race gave them their first full-course caution. 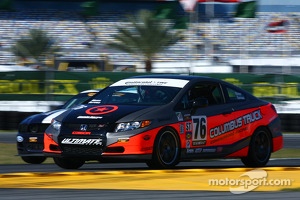 Mason capitalized on the restart and sparked some upward momentum early, gaining five positions in the first eight laps after going green again on lap three. He then continued his steady climb up the pack through the next caution just five laps later, piloting the No. 76 Columbus Truck/HPD Honda Civic Si all the way into third place by lap 14.

Burrows then took over the controls during the third caution period of the race and rejoined the pack deep in the field. But the former champion made the most of a very long stint, continuing the excellent run and clocking the team’s fastest lap just after entering the car on lap 22. He continued on, working to eke out the lap times while also preserving the car to be as strong as possible in the closing laps of the race.

“It was an interesting strategy run for us, and it ended up working out really well,” said Burrows. “We had planned on pitting on green around 35-45 minutes and that yellow came out right when we were planning on pitting so it worked out perfectly for us. Then on the other yellows we were just saving fuel.”

After the fourth and final caution of the race, he steadily picked off the drivers in front of him, running to a fifth-place finish in the last few laps of the race.

“The front tires were pretty worn out,” said Burrows of his final stint, “And I was playing it kind of conservative towards the end knowing that we have to be ready to race in Kansas in just four days, but I could feel the other guys in front of me struggling as well, so I just kept going. It was a great run for Ray Mason and a great run for the team, so that is awesome. Now we are looking forward to the next race,” added Burrows.

The Compass 360 crew now looks to carry this hard-earned positive result into the final three races of the season, starting next weekend at Kansas Speedway.