PETALUMA, CA (September 30, 2012): The day may have started slowly for TRG in the Rolex Grand-Am finale at Lime Rock Park but by the end of the day the No. 66 Porsche 911 GT3 Cup car worked its way into the top five, giving Porsche its highest finish among GT class entrants. 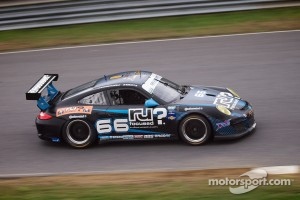 Bob Doyle, hampered by a black flag resulting from another car's incident in qualifying, started the car in the 14th GT spot. The early portion of the race, including the green flag, saw several cautions and Doyle kept the car on pace with his RUFocused.com Porsche moving the car forward with every opportunity.

"I know this track pretty well,"said Doyle, "and I know that the short length of this track keeps cars on top of you at all times. My goal was to run as hard as I could and hand the car over the Spencer (Pumpelly) to make a run at it and he did."

"Bob did a great job," said the veteran Pumpelly. "Everyone did! The crew gave me some super pit stops, we avoided some of the attrition on the track and took advantage of situations that were handed to us."

Pumpelly worked the TRG Porsche into sixth position by late in the race when a caution came out with about 25 minutes remaining bunching the field. Taking tires and a splash of fuel, Pumpelly kept within 10 seconds of the leader but the 3.8 liter Porsche was not able to make a run to gain much ground. When the No. 44 leading Porsche pulled in with only two laps remaining for running out of fuel, the No. 66 car propelled into fifth.

"Our guys just kept after it all day long," said team owner Kevin Buckler. "We knew we probably didn’t have the strongest car overall today, but to be the top finishing Porsche says we did a lot right. We were smart and consistent and Bob drove an awesome opening stint. My hats off to Bob, Spencer and the entire crew for an excellent season finale run."