Max Angelelli and Jordan Taylor excited about the debut Grand-Am series event at the Circuit of the Americas.

AUSTIN, Texas – What a difference a year makes as the No. 10 Velocity Worldwide Corvette Dallara DP team of Wayne Taylor Racing heads to the beautiful, new Circuit of The Americas Formula 1 facility in Austin, Texas, for round two of the 2013 GRAND-AM Rolex Sports Car Series campaign – Saturday’s GRAND-AM of The Americas. 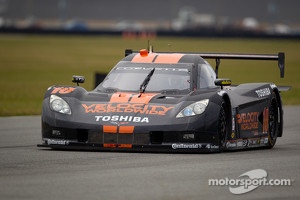 Veteran Italian Max “The Ax” Angelelli and his new full-time co-driver, 21-year-old Jordan Taylor, are coming off a resounding second-place finish at the season-opening Rolex 24 At Daytona alongside IZOD IndyCar Series champion Ryan Hunter-Reay and are looking forward to the chance to leapfrog the championship-leading Scott Pruett and Memo Rojas with another solid performance on the 3.4-mile, 20-turn home of the U.S. Formula 1 Grand Prix this weekend.

While Angelelli and most of the rest of the Rolex Series paddock has yet to see the racetrack in- person, Taylor had the opportunity to test with the American Le Mans Series factory Corvette team he drives for part-time last December, which should help flatten out the learning curve for the Velocity Worldwide team to at least some degree this weekend.

Add the team’s excellent record at venues where it’s raced for the first time over the years and Angelelli and Taylor just might find themselves at the top of the standings for the first time since the June 2009 Sahlen’s Six Hours of The Glen at Watkins Glen (N.Y.) International. Angelelli and his various co-drivers since joining the Rolex Series in 2004 have four wins and eight podium finishes in first-time visits to racetracks. Moreover, at current or former Formula 1 facilities, Angelelli has four wins (two each at Watkins Glen and Montreal’s Circuit Gilles Villeneuve) and 21 podium finishes in 31 starts.

It’s been five weeks since your stellar run in the Rolex 24. Safe to say you can’t wait to get back in the racecar at Austin? “First of all, the long wait was actually nice and sweet because of our result and our chance to enjoy it. We definitely go to the second race in the championship with a lot different approach than last year. We are in a much better position so we have a much better psychological approach. As far as the track, it was made for Formula 1, and I’ve seen and heard it’s a great facility, so very nice and comfortable. From what I’ve seen, it looks like a pretty safe racetrack with places to overtake. When you run these types of tracks, people take chances and there will always be a risk of contact, they stay next to you. So that to me is a little bit of a concern, but on the fan side it will be a very exciting race. They should come because I’m sure we will have a very nice, exciting race as GRAND-AM normally shows its fans.”

What do you mean by taking a different approach in the championship? “We will be able to approach and run this championship a little bit differently than in the past. As far as championship points, we will want to gather as many points as we can rather than push ourselves and force ourselves to drive like crazy to score wins like we have in the past when we were so far behind in the championship after Daytona and you needed to close the gap quickly. When you drive like that, you open yourself to mistakes, not just in the race but starting with the first day of practice each weekend. Last year, because we had such a gap after the first race, we took chances during practice with setup decisions. This year, we will have more of a calculated race weekend where we will have time to analyze things and not be in a rush to make calls. We are a good team. We made many good calls last year, but it’s always very risky and very difficult racing a championship under challenging conditions. So I’m looking for more of a sweet and smooth path toward the championship this year.”

What is your typical routine when it comes to preparing for your first visit to a new track? “Normally, when we go to a new racetrack, I’m searching for the closest Starbuck’s, so I’ve spent a lot of time in that search. (Laughs.) Unfortunately, the search was unsuccessful, so I’ll have to rely on Jordan to help me out when we get there. As far as the racetrack, I’ve watched YouTube videos, and I’ve been studying Jordan’s notes from his test weekend with the Corvette ALMS team. He drove there, already, so I’m the one who’s going to Jordan’s classes before this race weekend than the other way around. It’s going to be very exciting because you have variety. You go from low to high speed. So, as a driver, choosing setup will be challenging. We don’t know whether to go low downforce or high downforce, so I have lot of questions that will be answered once we get out there for testing on Thursday. The track looks like it’s kind of long. There will not be a lot of free practice, so we need to use the short time we have getting everything sorted and have time for ourselves to learn more about the track, make sure we are using the track 100 percent and not only 80 or 90 percent.”

You’re one of the few competitors who’s already had a chance to drive on the Circuit of The Americas. That should bode well for you this weekend? “I tested the (ALMS factory) Corvette there in early December, so it was nice to be able to see the track and drive it. Everyone in America was watching the F1 race and seemed to be impressed with the new facility and everything. It was fun to actually get to see it in-person and I got to learn the track. It was surprisingly difficult on how technical it was, so I’m glad I did get laps around there. It seemed to be a little difficult to get up to speed and get a rhythm. Having done that, I’m more confident that we won’t have to waste time getting to just learn it this week.”

What were your impressions of the track, and how do you expect the No. 10 Velocity Worldwide Corvette Dallara DP will do? “The first half of the track is a very high-speed technical section, high-speed corners and big flow. Then, a massive backstraight, where top speed will be important. The last section is very basic but also has some technical sections. Overall, it’s probably one of the most technical racetracks I’ve ever driven, definitely the most technical here in the ’States. The Corvette guys compared it to other F1 tracks they’ve driven, like Turkey. The elevation changes are a fun thing. Since I tested there, I’ve been watching all the YouTube videos I could find. The best I could find are the F1 on-boards, but they’re going a lot faster, so it’s not ideal to gauge our braking points and all that, but characteristics of track as far as tire wear and all that should translate pretty accurately to our cars. It’ll be my first real road course in this Corvette Dallara DP. The Corvette DPs were good at most tracks last year, like Barber and Detroit and Watkins Glen. This track has bit of everything – a huge variety of high- speed and low-speed corners and a range of everything – so, hopefully by end of each lap, all cars will be equaled out on lap time. Then again, that’ll make it a challenge to pass people.”

What’s your post-mortem on your inaugural run with the WTR team in the Rolex 24? “The post- mortem on Daytona was that it was an unbelievable race for us but the result was a little depressing because we were flawless, never went to the garage, the strategy was good, and we still finished second. It’s kind of depressing that we didn’t get the win, but obviously we can’t complain about getting second place at the biggest race of the year. We left with good points rather than a huge deficit that can easily happen after that race. Overall, it was a great experience. I now have a long race like that under my belt and experienced first-hand how the team works overall. I guess we’ll see going forward how we stack up against everybody else with this being the first real sprint race. We were quick in the race at Daytona, relatively speaking. If we can qualify well and keep it up front, the guys always make up ground on pit stops, so if we’re in top three at the end, if we’re not leading already, great stops like we had all race long at Daytona will allow us to jump a few cars every time.”

You’re coming off a solid runner-up finish at Daytona. How do you feel about carrying that momentum to the Circuit of The Americas for round two this weekend? “We’re definitely starting the year off so much better than last year. Obviously, I was really proud of the team and the drivers at the 24-hour. Everybody could see without a doubt the BMWs had more power than everybody else. In a straight shootout, we could not have competed with them. But thanks to the fact our team was absolutely flawless the entire 24 hours, we at least had a shot at them in the end. One thing you can write in black and white – there is absolutely no substitute for horsepower, whether the track is slow, long, medium, wide open, tight and twisty, whatever. Austin looks like a spectacular venue and I’m always happy to go to new venue. The facilities look fantastic. After some of the things GRAND-AM has done in the area of the engine rules since Daytona, maybe that will put us in a more balanced playing field. But we’ll never know for sure until we get on the track and all run together.”

What’s your assessment of Jordan’s first official race outing with the team and your expectations for the rest of the season? “For Jordan, this will be interesting weekend. The good thing is he’s actually tested at the Austin track, so hopefully that puts him a little ahead of everybody else. It’ll be interesting to see how everything will pan out with Ricky in the 90 (Spirit of Daytona Corvette DP). This will be the first time the two of them will actually get to race head-to-head in DPs. Jordan did fantastic at Daytona. He got really good fuel mileage. He was very good on the equipment, didn’t abuse the car at all. I’m really looking forward to his progress this season. So far, so good.”