Before getting into the details of another brilliant victory by Max Angelelli and Jordan Taylor in the No. 10 Velocity Worldwide Corvette Dallara DP of Wayne Taylor Racing (WTR) during Sunday’s GRAND-AM Rolex Series Continental Tire Sports Car Festival at Mazda Raceway Laguna Seca near Monterey, Calif., let’s cut to the chase: the veteran Angelelli and his 22-year-old first-year co-driver Taylor are a fourth-place finish or better from clinching the 2013 Rolex Series DP-class driver championship at the Sept. 28 season finale at Lime Rock Park in Lakeville, Conn.

Today’s dominating win by Angelelli and Taylor, featuring a race-high 72 of 105 laps led by Taylor, created a little breathing room in what was the tightest logjam at the top of the driver standings in the history of the Rolex Series heading into the penultimate round. It gave the WTR duo an eight-point advantage over three-time-defending champions Scott Pruett and Memo Rojas with just one race to go.

The day began with Angelelli and Taylor leading a pack of 10 drivers all within five points of the top spot. But, as today’s two-hour, 45-minute event wore on, Angelelli, Taylor and the No. 10 Velocity Worldwide Corvette DP team at times appeared to be light years ahead of all other competitors as Taylor managed hefty leads of 15 to 30 seconds or more through the middle stages of the race, then had little trouble pulling away from the field on a pair of late-race restarts. 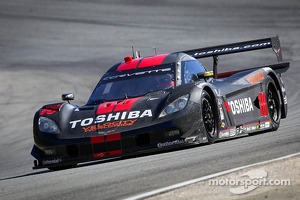 Taylor took the checkered flag 2.692 seconds ahead of the runner-up Pruett in the No. 01 Chip Ganassi Racing with Felix Sabates BMW Riley just three weeks removed from his epic, nail-biting final 40 minutes of holding off Pruett for the victory on the road course at Kansas Speedway in Kansas City. Today’s result made it a series-high four wins on the season for Taylor and Angelelli, upped Taylor’s career total to six Rolex Series wins and Angelelli’s career total to 25.

Before having to keep Pruett at bay over the final laps today, Taylor also found himself with a rearview mirror full of the No. 02 Chip Ganassi Racing with Felix Sabates BMW Riley of Scott Dixon, the 2008 Indianapolis 500 champion and the winningest driver in IZOD IndyCar Series history, on consecutive restarts with 18 minutes and less than four minutes remaining in the race, respectively.

“It definitely fazed me,” Taylor said of racing against the No. 02 BMW. “Dixon, (Dario) Franchitti (Dixon’s co-driver this weekend), Pruett – all these guys are legends in my mind. I’ve grown up looking up to them and they’re still my heroes. I still watch them in Indy cars, so I was definitely under pressure. But I knew if I could hold them off, I would be in a good position for the points. And it couldn’t have been a better points day for Velocity Worldwide, Toshiba, GM, SunTrust and the whole team.”

Taylor pointed to the learning experience of holding off Pruett for so long at Kansas as a boost to his confidence today.

“It definitely helped a lot,” he said. “I raced against guys in GT who are great drivers, too, so my whole career in GT I learned a lot from them, including how to hold guys off. Having Pruett on me for an hour and a half (at Kansas) was intense. Now, having Dixon on me for about 30 minutes was good for experience. I’ll put that one in my book for future reference. It was definitely a good race for us today. Once we left that first yellow (at the 30-minute mark) and had a bunch of green-flag running, we pulled a good lead and I was hoping it would stay green so I could use that buffer to our advantage. But, once it went back to yellow, having Dixon and Pruett right on you is pretty intense. I was pretty glad to be able to hold them off and get a win for the guys.”

Angelelli, who is vying for his second career Rolex Series title to go with the one he co-drove to in 2005 with Wayne Taylor, Jordan’s father and team owner, qualified the No. 10 Corvette DP second and drove a clean opening stint, trailing only polesitter Richard Westbrook in the No. 90 Spirit of Daytona Corvette DP when he and the rest of the field pitted during the day’s first of three caution periods at the 30-minute mark.

Angelelli turned over the driving duties to Taylor on that stop, and the WTR crew’s typically fast work on the fuel-and-tire service put the 22-year-old in the lead for the first time.

From that point, Taylor only relinquished the lead on scheduled fuel-and-tire stops with an hour and 19 minutes remaining, and with 52 minutes remaining. He was challenged for the lead only on the restarts, but managed to drive away from the field each time.

“This Velocity Worldwide Corvette team is just the best, in my opinion, and Jordan, as usual, just delivered,” Angelelli said. “He always has this year. I’m very proud of him. He did a fantastic job – very strong, very fast, very consistent, never a mistake. This is the way to win a championship.”

With their eight-point lead in-hand, Angelelli and Taylor head to the eight-turn, 1.5-mile Lime Rock circuit where Angelelli and the No. 10 team are undefeated. Co-driving with Ricky Taylor, Jordan’s older brother and current teammate to Westbrook in the No. 90 Spirit of Daytona Corvette DP, Angelelli scored consecutive victories at the legendary New England road circuit in 2010, 2011 and 2012, all in dominating fashion.

“We’re in a good position, but we still can’t make any mistakes,” Jordan Taylor said. “We’ve got to do what we always do and try to execute as well as we can. You saw what the 2 car (Starworks BMW) and the 5 car (Action Express Racing Corvette DP) did today – they made some mistakes and lost a lot of ground in the championship, so it can happen to anybody. We’ve just got to keep on our game for Lime Rock and, hopefully, come away with the championship.”

While Pruett and Rojas sit eight points behind Angelelli and Taylor in the driver championship, the No. 99 Gainsco/Bob Stallings Racing duo of Alex Gurney and Jon Fogarty are 11 points back, No. 5 Action Express Racing Corvette DP co-drivers Christian Fittipaldi and Joao Barbosa are 13 and 15 points back, respectively, and the No. 2 Starworks BMW Riley duo of Ryan Dalziel and Alex Popow are 20 points out of the lead.

In the team championship, the No. 01 Ganassi BMW is 11 points ahead of the No. 10 Velocity Worldwide Corvette DP and need only finish sixth or better at Lime Rock to clinch that title for the fourth year in a row.

“I’m just ecstatic,” team owner Wayne Taylor said. “The team, yet again, ran a flawless race. Brian (Pillar) did a magnificent job engineering the car, Max had a brilliant start, and then Jordan was, again, just incredible. I can say this – this win was definitely down to the team. Everybody has been absolutely amazing. Thanks to Toshiba, Velocity Worldwide, Chevrolet, General Motors, SunTrust, all the partners we’ve got that afforded us the chance to be here. It is a great day.”

Taylor, Angelelli win going away at Laguna Seca in No. 10 Corvette DP

Kurt Busch predicts Johnson will shine on ovals in IndyCar