Alex Welch: "It’s such a fun series, and the folks at Lamborghini do such a great job..." 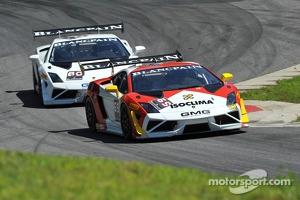 Alex Welch’s No. 80 Spyder/Lasso machine closely behind No. 69 machine of Parris Mullins and Tom O’Gara.

“What a spectacular debut for the program,” stated GMG team owner James Sofronas. “We didn’t want to come to Lime Rock unless we knew we were going to be completely prepared and capable of performing to our standard, and I think we did that.

The team put several days of testing in at the Thermal Club in California before we came, not to mention our years of experience with Porsche and Audi in other series, and as a result our team’s performance was second to none.

I’m so happy to see Alex take an overall victory today. He’s been a long-time partner of our team, and it makes me so proud to see him finally win a big one. This whole deal literally came together yesterday morning, and thanks to our understanding of the car and data sharing, Alex was able to get right up to speed.

It was also great to see Tom and Parris come so far in only a couple days’ running, and of course my heart breaks for Ryan and Lee who were so close to their second-straight win. I can’t thank everyone at Lamborghini Beverly Hills, O’Gara Coach Company and Luna-C Clothing enough for making this weekend possible.”

As the second race of a double-header weekend for the new series, GMG was off to a great debut after drivers Lee Davis and Ryan Eversley shared a victory during yesterday’s inaugural round. Taking the green flag in second, Lee Davis, in the No. 33 Luna-C Clothing Lamborghini Gallardo LP 570-4 Super Trofeo, would eventually take the lead during his share of the race. With Alex Welch’s No. 80 Spyder / Lasso machine closely behind, both cars would become part of a three-way fight for top honors.

As part of the spectacle, all cars are required to make one 90-second pit stop during the one-hour race. With all cars pitting around the halfway mark, the No. 33 team stuck to their strategy of switching Lee Davis for Ryan Eversley, with Alex Welch electing to drive the entire stint in the No. 80 machine.

With both cars now in first and second place after stops, the race appeared to be smooth sailing for Eversley who built a comfortable gap over Welch in the closing stages. Welch, meanwhile, built a similar gap to the field behind him. Unfortunately, just nine minutes from his second victory, a tire failure would cause Eversley to limp back into the pits, handing the lead and eventual victory to Welch. Quick work to change the tire by the GMG crew would still prove fruitful for the No. 33 car, which took third.

“I’m glad I signed on!” stated Welch. “James had literally called me about this opportunity while I was waking up on Friday. It’s hard to explain how late this came together. The whole reason this was possible was because the team had these cars so well sorted out before I showed up, and they’re very easy to drive. It’s such a fun series, and the folks at Lamborghini do such a great job taking care of everyone, this has been a great weekend. It’s nice to get an overall victory, and hopefully there’s more to come.”

For Luna-C Clothing’s Lee Davis, even if the result wasn’t a repeat victory, another podium as well as taking the fastest lap among gentleman drivers (and third fastest overall) is a nice end to the weekend. “We were so close to winning again, it was brutal to watch,” stated Davis.

“Ryan was completely checked out and just a few minutes away from another win. Regardless, the team did a great job getting the tire changed so quickly; it’s still nice to get a second podium. I have to thank everyone at GMG and, of course, Lamborghini Beverly Hills and Luna-C Clothing.”

For co-driver Ryan Eversley, a podium finish is still a good feeling even if not a win, especially having turned the fastest lap of the weekend. “Of course I’m disappointed we didn’t win,” stated Eversley. “GMG and Lamborghini Beverly Hills gave us a car that was clearly in a position to win, but it just wasn’t our day.

I guess you could say I drove the wheels off! Regardless, thanks again to Lee and everyone at Luna-C Clothng for giving me this great opportunity; I’m still happy to come home with another trophy. Alex drove a great race and it’s nice to see him enjoying a victory like this.”

Also noteworthy was the performance of the No. 69 machine of Parris Mullins and Tom O’Gara. Beyond taking eighth today, the duo made impressive work of the weekend, improving their pace by over three seconds from the start of the weekend to the end. Taking advantage of GMG’s data sharing and driver development program, the Southern California-based duo drove remarkably in front of a large local crowd.

“We really enjoyed the weekend,” stated Tom O’Gara. “From day one, GMG has been great to work with, and I have to thank James and the entire crew for putting together a great car. From our first laps to the last, we never stopped going faster.

It was nice to get out there and race one of these beautiful cars! The entire Lamborghini Super Trofeo Series is incredibly well run, and the hospitality and premier level of service is simply unmatched.”

For teammate Parris Mullins, the main theme of the weekend was time in the car. “What’s great about the series is the amount of time we have in the car,” stated Mullins. “This is a great place to come for a driver who is looking to gain experience at a premier level. You simply can’t beat the quality of car at this type of event, especially when matched with the amount of seat time we all had. GMG and Lamborghini Beverly Hills have put together a great program, and we look forward to more!”

Following an impressive debut event, the entire Lamborghini Super Trofeo Series will resume in one month, joining the GRAND-AM Rolex Sports Car Series at Kansas Speedway. GMG will have more announcements on series involvement in the coming weeks.