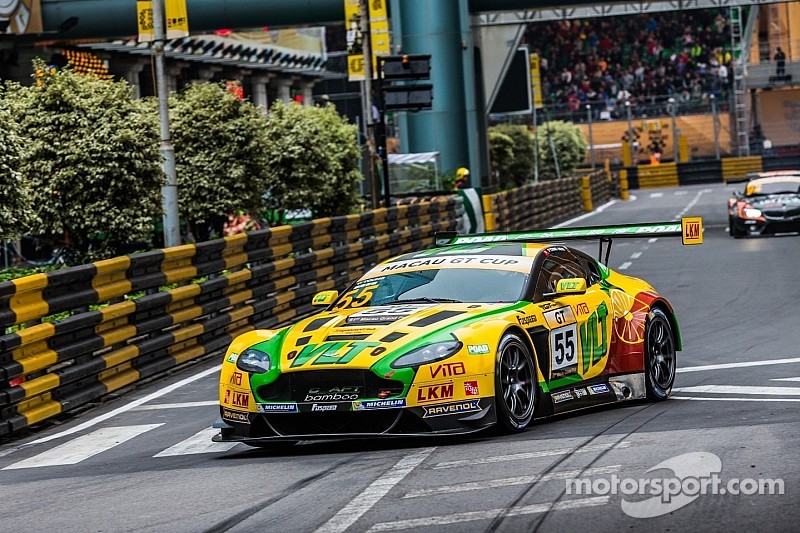 Gaydon - Aston Martin Racing works driver Darryl O’Young will contest the Macau GT Cup race this weekend (14 November) in the Craft-Bamboo Racing V12 Vantage GT3 and is hoping to win the race once again in front of his home fans and sponsors.

The 12-lap sprint race, part of the Macau GP, takes place on the streets of Macau and draws in up to 65,000 spectators and boasts global TV coverage. Hong Kong driver, O’Young has raced on the 6.2-km long street circuit 11 times and it is arguably his most successful circuit having, most notably, won the inaugural Macau GT Cup in 2008 and taking second place in 2009.

After a four-year break, while he contested the World Touring Car Championship race instead, O’Young is back contesting the GT Cup and is confident of a good result.

I don’t only enjoy racing here because I have had great results in the past, but because this is my home race.

“I’m very confident on this circuit,” commented O’Young. “I’ve always been successful here in both GTs and touring cars and I think the Vantage GT3 will be very quick, especially on the long straights.

“I don’t only enjoy racing here because I have had great results in the past, but because this is my home race. We have some top sponsors on-board including Vita VLT, a brand that I grew up with, and I’m looking forward to representing them both on and off the track.

“I’ve really enjoyed my return to GT racing this year and this race is a real highlight for me.”

This year, O’Young is contesting the FIA World Endurance Championship (WEC) with Aston Martin Racing and has enjoyed podium success with the #99 Vantage GTE, but, due to the Macau GT Cup race, will miss the penultimate round in Bahrain.

“Of course, it’s a shame not to have Darryl with us in Bahrain,” commented Aston Martin Racing’s Team Principal John Gaw. “But, he is so strong on the Macau circuit that we feel he could take the GT Cup race win. It’s one of the top GT3 races in the world and it’s important that we send our best drivers and teams to challenge for us around the world.

“We did this with Jonny Adam (GB) and Andy Soucek (ES) in the Baku World Challenge street race a fortnight ago and, together with Beechdean AMR, we took second place. Craft-Bamboo Racing is a very professional and successful team and, together, we have a good chance of similar success in Macau.”

Joining O’Young in a bid for victory in Macau this weekend is Frank Yu (HK). The GT Cup race is also the final round of the 2014 GT Asia Series and, with the championship title up for grabs, Yu will be looking to gain maximum points in his Craft-Bamboo Racing V12 Vantage GT3, nicknamed ‘The Hulk’.

The team will arrive in Macau this week ahead of the GT Cup race that takes place at 0900 local time on Sunday.

A word from Edoardo Mortara