Warren Luff and Frank Yu claimed their first podium of the 2014 GT Asia Series at the Korean International Circuit.

The team then executed perfect pit-stops for both cars, Luff handing over driving duties to Yu, and Kim to his driver partner, Natasha Seatter (MY). 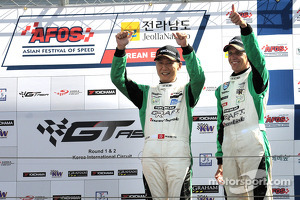 Podium for Frank Yo and Warren Luff

As Yu went out, he opened up a 3 second gap to the car behind him but a Safety Car period closed the gap right down leaving Yu to fend of the charges once again.

Meanwhile, Seatter had to come in for a drive through penalty for speeding in the pit-lane, dropping them down to eighth. It was still an impressive performance by the two first-timers in the GT Asia Series.

Earlier in the day, the team performed well during the qualifying session with both cars setting times that placed them within the top ten.

Team Manager, Russell Eeles – “We feel that for the season opening race in GT Asia, it was an impressive performance by both cars especially with the car #99 drivers, Tacksung and Natasha, who have performed beyond our expectations. Based on our results this morning, we are looking forward to a successful weekend with both cars.

“It is our first Asian outing as Craft-Bamboo Racing and everyone in the team is working hard and we are getting stronger by the session. The Series is also an interesting one with some really good drivers and our focus, at the end of the day, is on the Championship”.

Warren Luff (Car #97 - P5, Q1) – “Obviously it’s good to be in in P5. We did struggle a little bit in the second half of the session but we are faster now. It is a good start for the first race and for the Championship. Now we just have to make sure that Frank is okay with the car, anyway, we are the strongest pro-am pairing in the Series”.

Frank Yu (Car #97 - P6 Q2) – “We did a bit of a set-up change. We had understeer when Warren went out in the car and in my stint we had the same understeer but it was exaggerated. I couldn’t get the best laptimes and by the second fast lap I already caught traffic. I managed a clear lap at the end for P6. I wished for better but it’s the first race, first qualifying and we just want to secure as many points this weekend”.

Tacksung Kim(Car #99 - P10, Q1): “The car feels much better with the new tyres and it feels more stable. The aerodynamics of the car is nice and it feels really good at the high speed corners, but I did get into a little bit of traffic on the last lap of my session but we are good”.

Natasha Seatter (Car #99 - P7, Q2): – “I am quite happy with the results. I was quite confident before the Qualifying session and knew that we could do 2 minutes 11 or 12 seconds. So far, the first three laps were good and I managed to catch up to Frank. The car felt good but there was a lot of traffic, toward the end of the session I managed to get a clear lap and set my fastest time”.

Craft-Bamboo Racing will return to the circuit for round two of the GT Asia Series on Sunday, 18th May at 15:00 KST. The team will then pack up for rounds three and four, to be held at the Autopolis International Circuit, Japan from 30th May to 1st June 2014.

Ferrari on top in Korea after official practice

Craft-Bamboo Racing fired up for Fuji