Dramatic opening day at Shanghai for the GT Asia Series 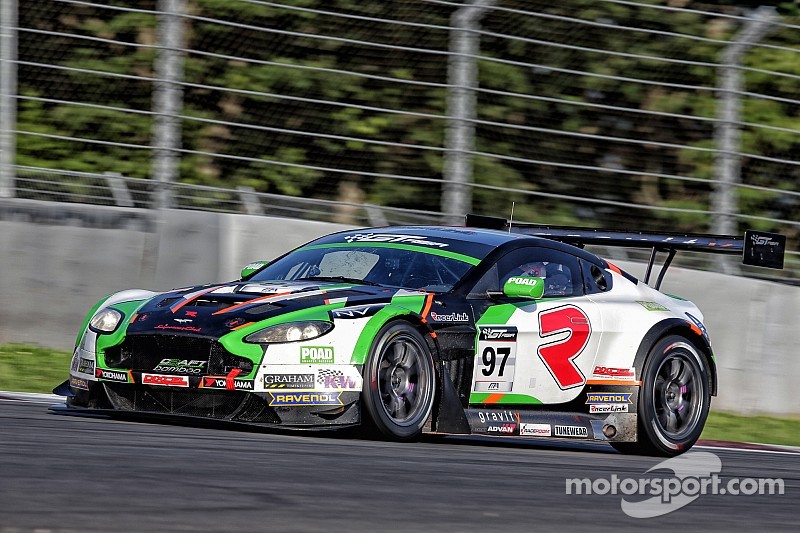 With four teams locked in a battle for the title ahead of the penultimate round of the GT Asia Series at Shanghai in China this weekend, there was everything to play for during Thursday’s official and unofficial practice sessions, and despite a relatively clean run through the day, a slight moment for the points leading Clearwater Racing McLaren late in the final session saw the car destroyed after heavy contact with the concrete safety barriers.

Fortunately for Hiroshi Hamaguchi, he emerged unhurt, but the immediate impact of the incident played heavily on his emotions. Little outside of his apologies to the team needed to be said, but it was clear the entire GT Asia Series paddock felt the impact, with an outpouring of support from all the Japanese driver’s rivals.

“First of all, we’re happy to say that Hiroshi was completely unhurt,” Clearwater Racing’s Team Principal Arjuman Kulasegaram confirmed. “If you were ever going to have an accident like that, you’d want to be in a McLaren, and we’re so grateful that he could walk away from what could have been a terrible accident.”

It’s a pity, but the car was almost undrivable and we had trouble pulling it up without locking tyres, so the morning was almost a complete write-off,

“I’m fine,” a disappointed Hamaguchi admitted afterwards. “Everything was going according to plan, both Rob [Bell] and I were where we wanted to be and just creeping up on the leaders, but coming out of turn ten I just ran a little wide and hit the astro-turf on the outside and it just snapped the car around. After that I was just a passenger, but am so grateful to McLaren for building such a strong car.”

Unfortunately for the Clearwater team, it appeared to be ‘game over’ after inspections revealed that the carbon chassis had been damaged in the impact, but offers of support from up and down pit-lane may yet see the points leaders on the grid for Friday’s official qualifying.

Up until that point, the McLaren duo had been circulating within reach of the leading teams, although everyone was chasing experienced Englishman Richard Lyons in the Craft-Bamboo Racing Aston Martin, the successful sportscar racer back in the #97 Vantage alongside title contender Frank Yu.

He was quick though opening ‘unofficial’ practice, then on top again during the single 30-minute official session in the afternoon, although he admitted he would liked to have been quicker.

“I think the track went off a little in that final late session,” he explained. “I was looking at a mid 46, but could only manage a 47-dead on new tyres which was not a lot quicker than I’d been this morning on old rubber. I’m pretty happy with the balance of the car, the team have it spot-on, we just want to make sure we keep it where it is and give Frank as many miles as we can, but his pace too is strong, so we’re looking pretty good at the moment.”

The car is identical to the Hong Kong Audi R8 I race in Audi R8 Cup, so that helped, and I like Shanghai which also helps, but a new combination is always challenging.

Second fastest was series debutante Chao Li, the Porsche Carrera Cup regular just three tenths shy of Lyons in his Porsche GT3-R, whilst David Rizzo was quickest of the leading title contenders in the BBT Ferrari 458, seven tenths down on Lyons and only hundredths clear of Audi star Christopher Mies. Rizzo’s ‘Spirit of Race’ Ferrari team-mate Rui Aguas was next, with the Clearwater Racing Ferrari 458 of two-time champion Mok Weng Sun and Keita Sawa just a second off the pace-setting Aston Martin.

NB Team’s Max Wiser was next in their Vantage, but the Italian confirmed they’d suffered an electrical issue with the ABS during the morning sessions and lost valuable laps, although his local knowledge and that of team-mate Jiang Xin will play into their hands across the weekend.

“It’s a pity, but the car was almost undrivable and we had trouble pulling it up without locking tyres, so the morning was almost a complete write-off,” he explained in frustration.

Bell and Hamaguchi were next, setting the eighth fastest time ahead of their contact, with the mighty Bentley Continental ninth with Jean-Karl Vernay at the wheel.

“I’m pretty happy with my pace so far,” the young open-wheel star admitted. “The car is identical to the Hong Kong Audi R8 I race in Audi R8 Cup, so that helped, and I like Shanghai which also helps, but a new combination is always challenging. My aim is to help get Jacky back the GTM points lead so he can go after his second title at Macau next month.”

GTM points-leader Thomas Fjordbach was next quickest in the leading Taiwan Top Speed Racing Ferrari 458 Challenge, although he may well have gone quicker if not for issues the team suffered during opening practice, a problem that wasn’t uncovered until team-mate George Chou had made contact with the turn three tyres.

“Something had let go in the front suspension before George’s off and we found it after we did some repairs after the two morning sessions, but once we fixed it, we were quick, but behind where we wanted to be because we’d lost so much valuable track time,” Fjordbach explained. “That said, I got closer to the Audi in the afternoon session, so we just have to keep it going. I think George and I are a stronger combination than them, so we’ll just have to see how the races play out.”