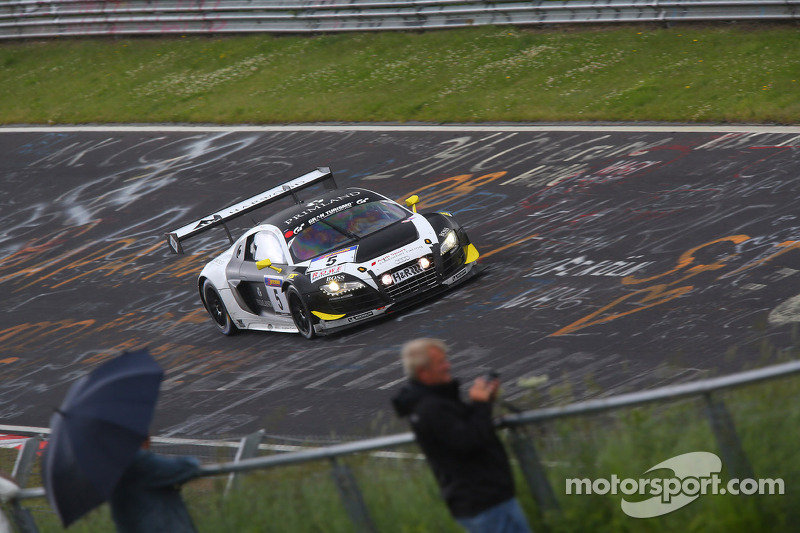 Racing for Phoenix Racing and driving the Audi R8 LMS ultra car, Harold Primat and his teammate Christopher Haase, secured a podium finish at round three of the Endurance Championship Nurburgring (VLN).

Known amongst the racing world as one of the toughest and most challenging racetracks in the world, this was only Harold’s second experience of racing at the iconic 21 kilometre-long Nordschleife circuit. The VLN is one of European motorsports’ leading endurance series, with a total of ten races held at the Nordschleife circuit, attracting the leading car manufacturers including Audi, Porsche and Mercedes.

With an extremely competitive field of over 180 cars, including fifteen GT3 cars, the Phoenix Racing car was qualified in fifth place. Christopher took the race start on Saturday afternoon with both Christopher and Harold each scheduled to do two ‘one hour’ stints in the four hour race. 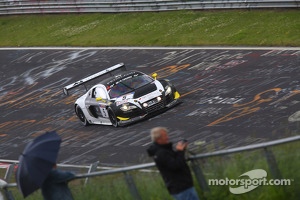 Christopher made a good start to the race and was able to move up through the field to P3 by the time Harold took over for his first stint of the afternoon. Harold had a challenging opening stint as rain began to fall steadily after thirty minutes of being in the car. Harold was forced to reduce the pace that they were running at and be cautious on the slippery track.

Once the rain had passed Harold picked up the pace again and came into pit for a driver change and Christopher’s second stint of the afternoon. Christopher had another strong stint behind the wheel and was running solidly in P3. However, tragically, racing driver Wolf Silvester suffered a heart attack whist driving and it was decided that the race be red flagged at the three hour mark.

The race wasn’t re-started so Harold was unable to drive the final stint of the afternoon. Instead the race results were finalised based on where the cars were at the red flag period. Harold and Christopher secured a P3 finish and Harold’s first GT podium finish in his racing career to date.

“A podium finish is a great result for the team. Personally it’s also a key moment in my racing career as it is my first podium finish in a GT car, despite it being only the second time I have raced at the Nordschleife. However today is not just about celebration, my thoughts are also with Wolf Silvester, and his family, who sadly passed away today. On this cruel weekend for motorsport, I also wish to send my condolences and thoughts filled with emotion to the family and the team of Allan Simonsen who tragically died at Le Mans on Saturday,” commented Harold Primat.

“My stint in the race was quite challenging as I faced a combination of rain and oil on the track so it was important to be fairly cautious during my time on track, whilst at the same time not drop down through the field. I’m looking forward to my next VLN race which will be on the 24th August and which will allow me to build further on my GT3 racing experience.;” continued Harold Primat.