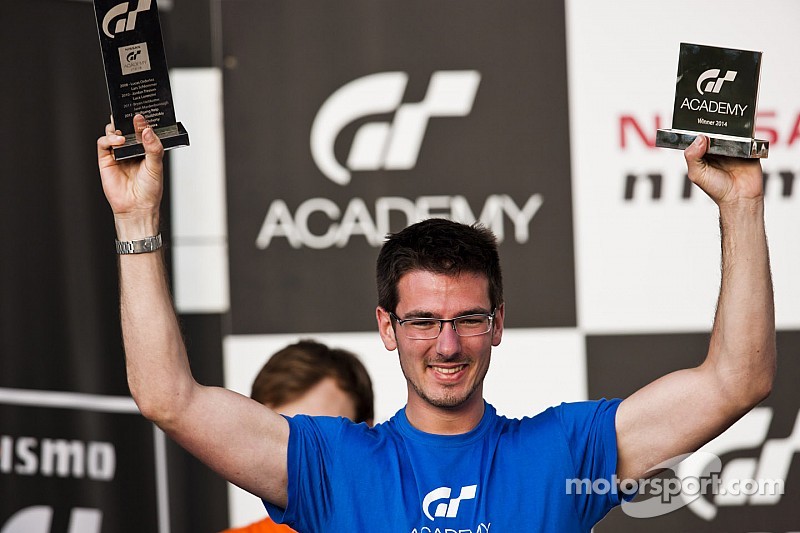 Stunning and intense Race Camp paves the way for a career in motor sport with Nissan for impressive Gran Turismo® gamer.

The NISMO PlayStation® GT Academy 2014 European Race Camp drew to a thrilling conclusion at the UK’s Silverstone circuit yesterday as Gaëtan Paletou, 22 from Barzun in France, was crowned champion. He will now go on to enjoy four months in one of the most advanced and successful driver development programmes in the world before racing for the Nissan NISMO race team in the international Dubai 24 Hour race in January 2015.

Gaëtan Paletou now has the chance to show that he has what it takes to become a NISMO Athlete and race all over the world for Nissan, following in the footsteps of the likes of Lucas Ordoñez (now racing in Japanese Super GT) and Jann Mardenborough (a racer-winner this year in the highly-competitive GP3 Formula 1 feeder series).

Gaëtan won his place at Race Camp from the hundreds of thousands of Gran Turismo® gamers that entered the competition across Europe. Having won through National Finals, he arrived at Silverstone as one of six to represent France, alongside 41 European competitors overall, representing 12 countries split into seven territory groups.

I was so happy that I won the race, but I didn’t know that I would win GT Academy

Over the course of eight days, the competitors were put through their paces both on and off track. They enjoyed some of the best racing instruction and mentoring in the world in a range of Nissan cars, including the mighty GT-R, the 370Z Nismo and 370Z race cars. Each group formed a close bond with their territory judge, who acted as a mentor, but then had to make the difficult decisions when it came to eliminations from the competition.

As well as the circuit driving and assessment, the competitors were judged on a series of challenges that included the Mud Mayhem assault course, Nissan Micra Stock Car racing, the Pit Stop Challenge in the Nissan Juke Nismo, the head-to-head Gymkhana, Rage Buggy Racing, the Traffic Challenge in the Nissan GT-R, a head-to-head Dogfight pursuit race in Nissan 370Zs and the Ridealong Challenge with their judges that included ex-F1 racers René Arnoux and Dani Clos, Rob Barff, Tim Coronel and GP2 stars Luca Filippi and Josef Kral.

Gradual eliminations led to today’s finale when each judge had to decide between their two best drivers for who would take the wheel of the 370Z race cars for an eight-lap race of Silverstone’s international circuit. A qualifying session saw two drivers eliminated with five going on to race.

The race itself featured drama from the outset. Three cars headed into turn one side by side but the Italian driver on the outside turned into his Belgian adversary who, in turn, hit the Portuguese driver who was making a dive down the inside. The Italian’s race ended in the gravel while his Iberian adversary limped home to the pits. The beneficiary was Gaëtan, who was able to capitalise on the incident to take a commanding lead that he held until the flag. Behind him British driver Karl Chard was running second, but appeared to miss a gear allowing Belgian Cedric Wauters into second.

After some heated judges’ deliberations, it fell to long-term GT Academy head judge, and ex-Formula One racer, Johnny Herbert to announce the winner on the Silverstone Grand Prix podium with Gran Turismo creator and President of Polyphony Digital Inc. Kazunori Yamauchi and NISMO Global Head of Brand, Marketing & Sales Darren Cox on hand to present the trophies.

“It’s incredible.” said an extremely happy Gaëtan. “I was so happy that I won the race, but I didn’t know that I would win GT Academy. It is very special for me and my friends who have supported me. This has been a very good experience – a long, hard week and very tight competition so I am so happy to win. Now I have to keep pushing to the next step.”

Darren Cox has been a driving force behind GT Academy since its inception. “I have enjoyed the experience of every Race Camp since we started and it is just getting bigger and better each year,” he said. “GT Academy has proved again and again that it can deliver fantastic racing drivers who are recording impressive results for us all over the world. Its success is backed up by the huge amount of interest in GT Academy among the motor sport community and the public alike. Gaëtan can draw inspiration from some impressive previous winners, and with the fantastic training and opportunities that he will receive over the next four months, I have every confidence that we will have unearthed yet another racer than can make their mark in motor sport.”

Also watching the denouement of Race Camp was Kazunori Yamauchi, who founded the competition with Nissan in 2008. “I have been very impressed by this year’s European Race Camp and the standard already achieved by the Gran Turismo gamers. It feels like we now hand over our gamer into the safe hands of Nissan who will continue his development as a real racing driver. This is a unique and special partnership, and I am very proud of what we have achieved together. It was great to meet so many Gran Turismo fans at Race Camp. I send all of them my congratulations and I know that they can all draw on the experience of GT Academy to achieve their goals in life. Special congratulations go to Gaëtan for his impressive victory.”