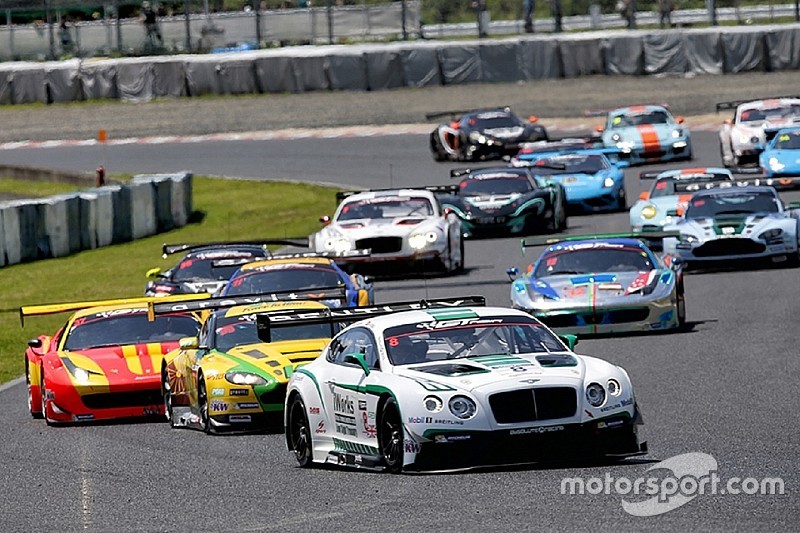 The GT Asia Series regulars will face a new challenge: The series’ first ever endurance round.

The 2015 GT Asia Series is at the mid-point of the season heading into Sepang where the series regulars will face a new challenge at the popular Malaysian circuit, the series’ first ever endurance round, an event which not only pushes many of the teams beyond the 60-minute races they are used to, but also comes with a double-points championship advantage!

GT Asia Series and Sepang are no strangers, with the Asian region’s most successful GT series entering it’s sixth season with 10 rounds having been contested across the last five seasons on the 5.543-kilometre Formula One circuit.

Desperate for victory at ‘home’

The list of winners across that time represents a who’s-who of past GT Asia Series seasons, but the standout performer is the very team that is looking to get their 2015 championship back on track, Singapore’s Clearwater Racing.

Reigning champion Mok Weng Sun had a tough start to the season with a DNF in the opening round in South Korea, before a devastating fire eliminated the team on the out-lap at Okayama. They got their championship back on track in Fuji with a second and a fifth, but they’re desperate for victory at ‘home’ in Sepang, and history shows they’ll be the team to beat.

Across the last five seasons, Mok and the Clearwater team have taken victory in nine of the 20 races held their, and in more frustrating news for their rivals, Clearwater themselves have taken 11 of those 20 wins, whilst Ferrari is the firm favourite on the long straights that follow the tight corners at Sepang, the naturally-apsirated 4.5-litre V8 has won nine of those 20 events, and five of the last six races held there..

Taking into consideration the results of the annual Sepang 12-Hour, the news isn’t much better for Ferrari’s rivals, with Clearwater Racing claiming victory in the Malaysian event over the last two years, with Mok behind the wheel on both occasions.

All of that aside, if there’s one thing that is proven in motorsport time-and-time-again, it’s that victory is never a sure thing, and whilst they start favourites - more especially with the return of WEC-regular James Calado alongside Mok, and Japanese SuperGT star Hiroki Katoh alongside former Sepang winner Richie Wee - Clearwater understand that their undeniable favouritism on their ‘home’ circuit also makes them a target..!

Whilst Clearwater might historically be the most successful Ferrari team at the Sepang circuit, there are two other strong Ferrari operations looking to build on the Prancing’s Horse’s impressive record in Malaysia; the BBT pairing of Anthony Liu and Davide Rizzo, and the emerging pairing of Todd Piti and Carlo Van Dam, both of whom have won rounds of the 2015 championship, something Clearwater is yet to achieve..

Don’t discount Craft-Bamboo Racing either, they may be without points-leader Jonathan Venter after a cycling crash in Australia whilst training which left him with a fractured hip, but they will find a more than qualified replacement to support Darryl O’Young in the VLT Aston Martin, whilst team-boss Frank Yu - who is a two-time winner at Sepang - will be out to make up for a difficult start to the new season.

Interush driver Yu took victory in round seven in Malaysia last year proving that he and the Craft-Bamboo Aston Martins have the pace to take it to the Ferraris, especially with Asian GT star Richard Lyons alongside, the Ulsterman fresh from the Suzuka 1000km GT300 event last weekend.

As for the new teams, don’t discount points leaders Bentley. They’re shown impressive pace in 2015 and are the only team to have taken two wins this season with former Sepang winner Keita Sawa and rising star Adderly Fong winning in both Okayama and Fuji.

The three-car Absolute Team Bentley operation will also see the debut of Bentley factory driver Andy Meyrick at Sepang, the runner-up in the 2014 Blancpain Endurance Series, the Englishman is replacing Andy Soucek in the #7 J-Fly Racing entry of Jeffrey Lee, whilst his former M-Sport team-mate Duncan Tappy will return to the #77 JV Global Bentley alongside reigning GTM Class champion Jacky Yeung.

Bentley won’t be the only 2015 race winners to keep an eye on in Malaysia, with the FFF Racing Team by ACM squad back to full strength after a pre-race accident at Fuji cost the team one of their three McLaren 650S GT3s. Back to full strength, the slick Chinese/Italian operation will also see a new entry, with Hong Kong’s Ronald Wu replacing Fu Song Yang in the #5 entry alongside Andrea Caldarelli.

Wu is no stranger to Sepang as a former Formula Masters China Series and Audi R8 LMS Cup entrant, he also tested with the FFF team at Dubai late last year and is a member of Lamborghini’s Young Driver Development Program in Asia with the new Huracan.

Round three winner Hiroshi Hamaguchi will be joined once more by former F1-driver Tonio Liuzzi, the Japanese driver having come off a solid run in GT300 at the Suzuka SuperGT round the weekend prior, and he’s also a former Sepang winner with Ferrari, so keep an eye on the #55 entry, especially as the team have enjoyed some valuable pre-season miles on the Malaysian circuit.

Don’t discount the Lamborghini’s either, with local stars OD Racing back in their Gallardo FL2 GT3 after a complete rebuild thanks to a shocking accident in the KL Street Race, whilst former Sepang winner Dilantha Malagamuwa can never be ruled out of a podium, especially with the pace shown by team-mate Kota Sasaki in the two Japanese rounds.

The GTM class too has started to become serious, with the leading title contenders looking to combat the emergence of former 500cc Grand Prix motorcycle star Takuma Aoki and team-mate Ken Urata, by employing their own superstars.

Opening round winner and current GTM class points leader Jerry Wang has employed the services of Australian GT3 specialist Warren Luff. Luff is no stranger to GT Asia, having taken the Craft-Bamboo Racing Aston to a podium finish on his debut in South Korea 12-months ago. Likewise Gulf Racing JP, they have employed Belgian star Dylan Derdeale to support Hisashi Kunie in the team’s Type 991 Porsche Cup Car in an effort to improve their chances on claiming the GTM title on debut.

Don’t discount the Taiwan Top Speed Racing Team Ferrari 458 Challenge cars either, they’re reliable and consistent, and that might just be the key to victory across the three hour, three compulsory pit-stop race.

Analysis: How the Indian drivers fared in GT Academy