The Swiss squad aims at being among the title bidders in the very competitive GTS class of the GT Open.

Joël Camathias has already finalized his main sporting programme for the 2014 season. The Swiss driver will again compete in the International GT Open, this time with an Helvetic squad, the Black Bull Swiss Racing based in Lugano. Camathias will be at the wheel of a Ferrari F458 GT3 and will have as team mate Mirko Venturi, one of the fastest Italian GT drivers.

The Swiss squad aims at being among the title bidders in the very competitive GTS class of the GT Open, which will again include eight rounds (of two races each) on the most prestigious European tracks. 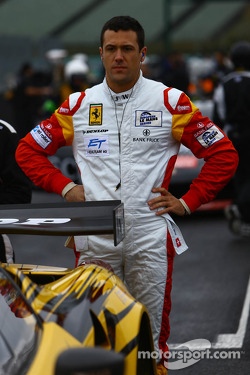 Joel Camathias: “I am very happy to be already in a position to announce my plans in the International GT Open for 2014 and to compete with a Swiss team. I got in contact with Black Bull Swiss Racing some weeks ago in Lugano and we immediately found ourselves on the same wave length. The Black Bull Swiss Racing has been able to build itself a solid reputation in only a few years and I was struck by the serious and professional approach of Arno Lovat and the other managers of the team, whom I thank for their trust.

An agreement was quickly found, and we can now announce it, even before the end of 2013. For me, it was important to continue driving a Ferrari F458, a car I know well and a brand of undisputed appeal, and I am sure that the Black Bull Swiss racing’s car, prepared at their technical antenna in Italy, will be competitive.

Mirko Venturi, who will be my team mate, is a talented and very fast driver. We know each other well from our karting years and I think we will form a good pair. The preconditions to do well are all reunited and I must say I am delighted to be racing again with a Swiss team. It brings me back to 2009, when I took my second GT Open title with Trottet Racing, and I hope this is well-wishing for 2014!”

Arno Lovat (Black Bull Swiss Racing): “After four seasons with an unchanged driver line-up, Black Bull is glad to embark on a new project in the GT Open with Mirko Venturi and Joel Camathias, who was the best choice we could make, both from a sporting and human perspective. Together we will enter a very professional and competitive series that Joel knows well, and we rely a lot on his specific experience in the GT Open. After being involved in the Italian GT Championship in 2013, Black Bull is back to the international scene, with the ambition to do well against a very strong and experienced competition. The entire team is already at work preparing for 2014, and we already feel the adrenalin of this new challenge.”

Dhillon and Scott in the British GT 2014 with AF Corse