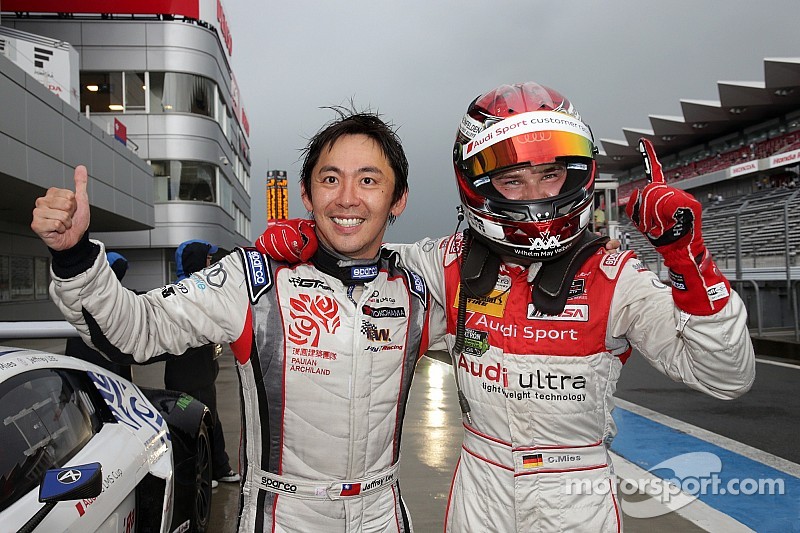 Despite avoiding much of Typhoon Neoguri which passed through the region on Thursday night, the fine conditions the GT Asia Series competitors enjoyed during official practice, qualifying and the opening race, rain re-appeared once more on Sunday morning for round six of the championship, the race getting underway in treacherous conditions with near zero visibility towards the rear of the field.

Pole-sitter Hiroshi Hamaguchi (Clearwatwer Racing McLaren) led the 32-strong field across the line to start the compulsory pit stop [CPS] 60-minute race, with former champion Mok Weng Sun (Clearwater Racing Ferrari 458) diving inside the similar BBT Ferrari of Anthony Liu as they made the run down to turn one.

Behind them visibility was restricted thanks to the full-wet Yokohama tyres and the huge aero generated by the field, a situation that rewarded the brave, drivers like veteran John Shen (Modena Motorsports Porsche) who took as many as a dozen cars on lap one.

In the end Liu held his ground under brakes into the opening turn, the Korean event winner pulling alongside Hamaguchi, dropping Mok back to third where he was soon under fire from old rival Frank Yu in the Craft-Bamboo Racing Aston Martin and Taiyou Iida in the Direction Racing Ferrari 458.

Liu pushed hard, but like Richard Wee in the second Clearwater Ferrari and Sean Fu in the NB Team Mercedes, was caught out in the tricky conditions and lucky to keep the car from spinning into the barriers.

As the rain continued to fall a number of drivers were caught out under brakes into turn one, notably Yu and GTM front-runner Francis Hideki Onda (Tunewear Audi R8 LMS), both running off track, but recovering to rejoin without incident.

The big mover in the field though was Vutthikorn Inthrapuvasak, the Thai driver - rated as one of the best in his home country - set a stunning pace in the Singha AAS Motorsport Porsche GT3-R to move through the field from his seventh-placed starting position to challenge the leaders and ultimately move to the front ahead of the CPS.

That started a fantastic battle for the lead with Hamaguchi taking the position back shortly after, whilst team-boss Mok sat just off the tail of the Thai driver in a waiting brief in case anything should happen with the two leaders.

As the CPS window opened, the two Clearwater Racing cars dived for the pits together, leaving Vutthikorn alone out front.

By virtue of their race one victory, Sawa was forced to wait four seconds longer than team-mate Bell, the Englishman now in the ‘box seat’ as the two gorgeous chrome Clearwater cars rejoined the field.

Vutthikorn hit pit-lane shortly after, handing the car back to Thai team-mate Piti Bhirombhakdi who rejoined in the lead but was quickly under fire from Sawa which may have been the catalyst for the Porsche driver spinning to the outfield as the Japanese star closed in.

That left Sawa clear in front, but the fastest car on circuit was experienced Audi factory driver Christopher Mies, the German starting to work his way through the field after taking over from car-owner and 2013 Fuji race winner Jeffrey Lee during the CPS.

For Korean GTM round winner Takuma Aoki, the popular former Japanese Grand Prix motorcycle star was out early in race two with aero damage to the Dilango Racing Lamborghini Gallardo LP520. Despite significant understeer and a shocking vibration, Aoki managed to make it to the CPS window and swapped over to car owner Dilantha Malagamuwa, the Sri Lankan retiring the car shortly afterwards.

The race then claimed it’s second GTM round winner, with Autopolis race winner Fukujirou caught out in the slippery conditions, spinning his Team KRM Porsche into the wall and retirement.

As the race looked to have settled into a rhythm over the closing laps, points leader Rob Bell was forced to pit for a CPS infringement, dropping the McLaren driver back down the order and forcing him to drive on the absolute limit of adhesion as he fought to retain the teams perfect 2014 record of finishing on the podium in every race. Sadly, despite his pace, he was unable to complete six straight podiums, ultimately crossing the line in sixth position.

Sawa meanwhile pressed on in the lead, but he was unable to do anything about the fast approaching Mies who ultimately moved through for the win in sight of the flag, Sawa settling for second and more valuable championship points, whilst Stefan Mucke worked his way back to a podium finish, taking third, almost 15-seconds back from the race leader.

“Frank [Yu] did a great job in the beginning, he kept us in a good position,” Mucke explained post-race. “After that I went out on the same tyres. It was very tough and getting very slippery out there, so we lost a little bit of time but we were able to keep up with the front at the beginning of my stint but then we lost a little bit of time due to the grip of the tyre.

“It was a shame but there was nothing more in the car, so I am happy with P3. It could have been better but P3 is alright, it was the best we could do in this race.”

Despite his spin, Piti Bhirombhakdi fought on over the closing laps to recover for fourth place, just marginally clear of the second Absolute Racing Audi R8 of Alex Yoong. Bell recovered from the team’s pit-stop penalty to claim sixth, with Tatsuya Kataoka seventh in the Direction Racing Ferrari.

Kevin Gleason claimed eighth in the second Craft-Bamboo Racing Aston Martin after team-mate Jonathon Venter completed the opening stanza of the race in fourth, with the B-Max Nissan and Davide Rizzo rounding out the top ten.

Former outright Fuji podium placegetter Francis Hideki Onda ran strongly again early before a couple of offs, one to avoid a rival, the Tunewear supported driver ultimately finishing seventh in class, whilst points leader Thomas Fjordbach failed to add to his round five tally after his team completed their compulsory pit stop and rejoined ahead of their allotted time, attracting a black flag and ultimately disqualification despite crossing the line fifth in class.

“It was sad for us not being at the end’s classification in this second race, but after all it was a productive weekend,” Fjordbach admitted. “We had a good pace all the weekend  and today we survived at the difficult torrential wet Fuji track.”

The series now turns its focus to Malaysia for rounds seven and eight on the Sepang International Circuit in Kuala Lumpur on 15-17 August.

Podium finish for Craft-Bamboo Racing on a wet Fuji Speedway