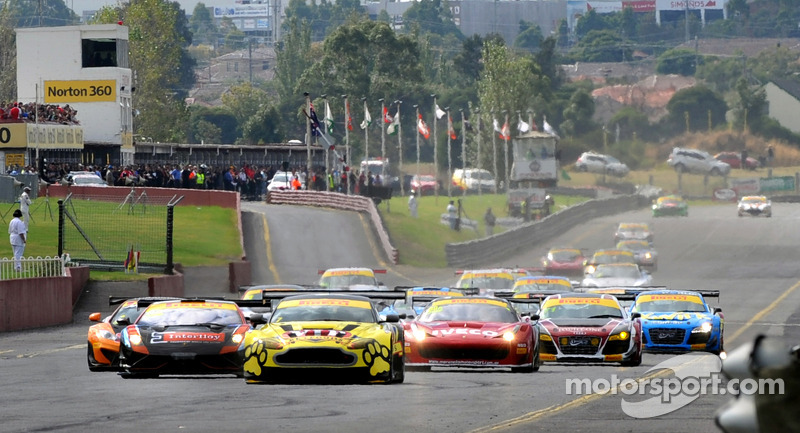 The Australian GT Championship presented by Pirelli returns to the Phillip Island Circuit on May 23-24 for the second round of the six round schedule, but unlike previous ‘sprint’ events at the popular world-class venue, this round will be all about endurance.

Trialed last year after the final round of the championship in New Zealand, the ‘101’ concept provides 101-laps of Phillip Island across 175-minutes of racing and the attraction of the longer race has brought with it an impressive entry list.

26-cars are already entered into the second round, with rumours a couple more are waiting to see if there cars will be ready, but even without them, the list is outstanding.

Eight cars will compete for outright honours in the Championship class with some very strong driver partnerships.

Arguably one of the favourites is championship points leader Richard Muscat in the Erebus Motorsport Mercedes-Benz SLS AMG GT3. 12-months ago, former Formula Ford national champion Jack Le Brocq made his debut for the team and dominated the round, setting a record breaking pole position time before winning both one-hour races comfortably. In bad news for the outright teams, Le Brocq rejoins the Erebus team to share the driving duties with Muscat as the two look to extend the team’s winning streak which now stands at eight wins from their last eight starts..

Reigning Australian GT champion Klark Quinn too will be a strong contender in the Darrell Lea McLaren MP4-12C, and with multiple Carrera Cup champion Craig Baird alongside once more, they’ll be looking to make amends for the Highlands 101 crash that almost certainly cost them victory last year.

Tony Quinn has repaired his VIP Petfoods Aston Martin but is yet to reveal his co-driver for the Phillip Island event, but as the winner of the inaugural ‘101’ at Highlands last year with V8 Supercar front-runner Fabian Coulthard alongside, you can bet his partner will be capable of extracting the best from the British-built V12.

Throw in the Interlloy/M-Motorsport Gallardo FL2 of Justin McMillan and Steven Richards, the returning Roger Lago in his identical Lamborghini with regular co-driver David Russell alongside and the Il Bello Ross Ferrari 458 Italia of John Bowe and Peter Edwards and you have a serious race on your hands, but don’t discount any of the teams in the outright class, expect them all to be fast.

Trophy class was one of the big features of the opening round at Sandown, with Dean Koutsoumidis and James Winslow leading home a Melbourne Performance Centre Audi 1-2-3 finish despite intense pressure from ‘newcomers’ Theo Koundouris and Ben Eggleston. Eggleston is out for Phillip Island, but Koundouris is back, and joined by rising young star Sam Power, he will again be an outright threat.

GT Sports too will come alive for the 101, with reigning champion Mark Griffith re-signing V8 Supercar part-timer Karl Reindler for the round. Last time the pair drove together was the Bathurst 12-Hour where they showed the Sandown winning Donut King Lotus a clean pair of heels before a late race mechanical failure. Griffith will be keen to dish out the same kind of punishment at Phillip Island.

WHO TO WATCH OUT FOR?


GT Championship (for 2012-2013 specification GT3 cars)
You’d be hard-pressed to look past the Erebus Mercedes with two of the hottest young stars to enter Australian GT in the last two seasons driving together, but don’t discount the speed of dual-champion Klark Quinn and Craig Baird, nor the McMillan/Richards and Lago/Russell Lamborghinis with Phillip island suiting the slick Italian machines. Expect too that Tony Quinn will announce a serious partner for his Aston Martin, and on that team’s NZ 101 performance last year, you could not rule them out as contenders either..!

GT Trophy (for GT3-spec cars 2011 and older)
Anyone game to put money on this… wouldn’t think so. Audi came up trumps at Sandown, but only after some of the other teams struck trouble. Phillip Island will be different, the Audi is better suited to the fast flowing coastal circuit, but with some hot new entries into the category and some serious co-drivers lining up with the car owners, there could be any one of six teams capable of winning, and don’t discount Audi making a return to the top step either, especially with the likes of Warren Luff and James Winslow on board..

GT Challenge (Challenge class cars - Porsche/Ferrari)
Former GT3 Cup Challenge champion Matt Kinsgley is the star performer of the Challenge class, and on his day, he’s almost unbeatable, but with former rival Terry Knight in the field, and V8 Ute race winner Andrew Fisher back alongside Indiran Padaychee, the race result is no sure thing. Don’t discount the reigning champion either.. Ben Foessel is young, he’s fit and he’s fast, he’s also keen to show he’s every bit a match for Kingsley..

GT Sports (GT4 category cars)
Karl Reindler proved to be Mark Griffith’s secret-weapon at the Bathurst 12-Hour, and he’s back.. He’ll have his work cut out though in the V6 Ginetta against the more powerful Lotus Elise which now has journey-man driver Ryan McLeod in the second seat alongside Tony Alford. This will be a battle to watch closely, a battle which may go all the way down to the final lap.