Three teams, two points and a GT Asia Series crown in the balance 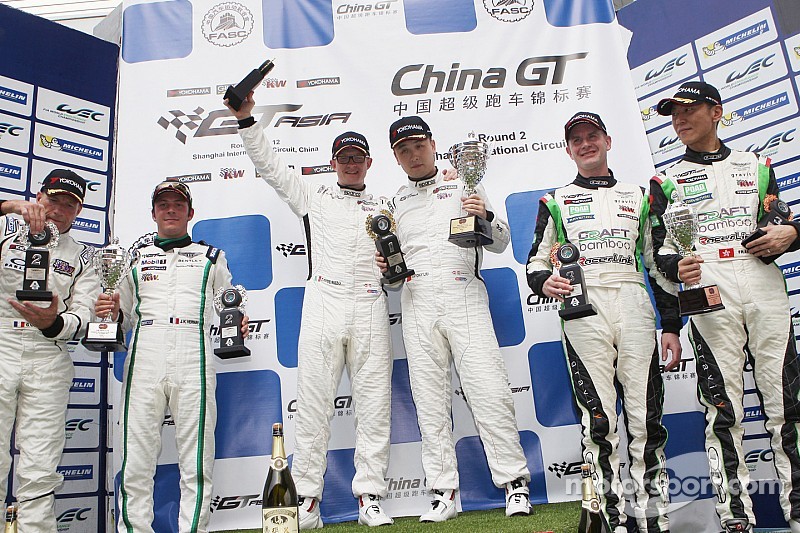 With two races to go in the 2014 GT Asia Series, the battle has come down to just two points, with this year’s surprise package - the BBT Ferrari 458 team of Davide Rizzo and Anthony Liu - taking back the points lead after their third win of the season at Shanghai.

Starting from pole position after top-qualifying in both 10-minute sessions, the BBT team felt they could take the fight to the points leading Clearwater Racing team, and they did it with relative ease despite a strong early challenge from the new Absolute Racing Bentley Continental GT3 of Jean-Karl Vernay and Thursday pace-setter Richard Lyons in the Craft-Bamboo Racing Aston Martin Vantage.

The result now puts the BBT team within two points of Mok Weng Sun and Keita Sawa on outright points, but two points clear of the same team on adjusted points with just two races remaining, whilst both the Hiroshi Hamaguchi/Rob Bell combination and Frank Yu are also in with a mathematical chance of series victory, something which will no doubt affect Sunday’s second and final race at Shanghai.

I was keen to get past the Bentley in the closing stages, but I thought about it and realised it actually handed us a disadvantage

Lyons made the stronger start of the two cars on the front row, but Lui held ground forcing the Englishman to drive around the outside, a position he felt was going to ensure him the lead through turn three, but as he came out of turn one he - and the bulk of the leaders - realised that Vernay was already inside them and moving across to lead through turn three.

Either the surprise, or the resultant bottle-neck through the fast right-left turns two-three combination saw both Lyons and the fast-starting Audi of Christopher Mies off into the gravel, forcing them both back in the order, Mies coming off the worst of the two after the left rear guard was pushed onto the wheel forcing him to pit for a tyre change.

By that stage the ever-present Rui Aguas slipped through to take third in the ‘Spirit of Race’ Ferrari and act as a rear guard for team-mate Liu who was comfortably second, but falling back from Vernay who immediately pushed to open a gap over the chasing pack.

Once two seconds clear, Vernay maintained the gap back to Lui as Lyons regrouped to make a challenge on the leaders ahead of the compulsory pit stop [CPS], although Aguas for one wasn’t about to make his life easy.

By lap nine the situation resolved itself though after Aguas came unstuck through the turn five chicane freeing Lyons to go after Lui for second. It took him a number of laps to close on the Shanghai-based driver, but by lap nine he made his way through and set his sights on Vernay.

...but with our lack of experience running the Bentley on the Yokohama tyre, we probably used the tyre too much early, so that allowed Richard to close before the stop, so we’ll look at that for tomorrow.

Behind the leading trio, Max Wiser had managed to work his way forward, but all was not well with the NB Team Aston Martin, a clutch problem was starting to emerge as a result of a leak at the pedal box, something which ultimately eliminated them at the CPS after they were unable to engage first gear.

Sadly for GTM points leader Thomas Fjordbach, the Taiwan Top Speed Challenge Ferrari 458 he shares with team-owner George Chou was languishing down in 20th position as a result of an electrical malfunction which kept cutting the car out between turns two and three.

Takuma Aoki was one of the first drivers into the pits, the multiple GTM class race winner handing over to team-mate Ken Urata, the two drivers effecting the stop within their allocated time after spending much of Friday afternoon practicing stops.

“There’s a lot to extracting Takuma from the car,” Urata admitted. “His handicap makes it a little slower in getting him out, but we also change steering wheels with the hand controls he uses, so it was taking us a bit over ten seconds more than the allocated minimum, but we worked over and over again to perfect a new system, and we did it, but boy my back can feel it now,” he laughed.

By the 25-minute mark, as the CPS window was about to close, Vernay and Lyons dived into the pits, Lyons using every inch of experience to make a huge gain on the run down pit-lane to be right on Vernay’s tail as they crossed the pit entry line.

The Absolute Racing team made a typically efficient driver change, which allowed Gilles Vannelet to leave the pits with the lead intact, although he was soon under fire from the charging Davide Rizzo who was already though the BBT team’s CPS, but as the two battled at the front of the pack, the Craft-Bamboo team lost valuable time during their stop dropping Frank Yu almost ten seconds behind Vannelet.

Within half a lap, Rizzo was through to the lead, with Vannelet holding station in what looked to be a comfortable second position, although that changed within sight of the flag, after a spin at the same corner that caught Aguas earlier in the race, the big Bentley though able to recover without losing position, although now he was under attack from Yu.

With the laps closing down, Yu made a strategic decision to retain third, whilst up front Rizzo was circulating comfortably to cross the line more than six seconds clear of Vannelet, with Yu holding station right behind him.

“I was keen to get past the Bentley in the closing stages, but I thought about it and realised it actually handed us a disadvantage” he admitted. “The Bentley doesn’t score championship points because it’s not a ‘series’ entrant, so I wouldn’t gain anything there, but by finishing second we would have incurred an additional two seconds extra during our CPS, so I decided to stay where we were!”

Up front though the BBT team were unchallenged, Rizzo and Liu explaining afterwards that whilst the championship was on their mind, they were just going after the win.

“We knew we had the package, and we knew we didn’t have to fight the Bentley,” Liu admitted. “So I just sat behind him and held on until the stop and Davide did the rest.”

“I knew I had to get the Bentley quickly, and after that, I just maintained the gap,” Rizzo explained. “Anthony set that up with his pole yesterday and his solid run in the opening stages, now we just need to concentrate on doing the same thing again tomorrow.”

Whilst happy to be on the podium in Bentley’s GT Asia Series debut, Vernay admitted that he was a little lucky at the start, and that it wasn’t quite as easy as it looked...

“I raced A1GP here in 2007 and did exactly the same move,” he explained. “So I knew it was possible, but from the third row I didn’t expect all the leaders to give me the opportunity that easily, but I knew I could pull it off, so I went for it. After that it was just a matter of holding the gap to the pack, but with our lack of experience running the Bentley on the Yokohama tyre, we probably used the tyre too much early, so that allowed Richard to close before the stop, so we’ll look at that for tomorrow.”

Unusually the Clearwater team were absent from the podium, although Mok Weng Sun’s fourth place finish was enough to secure the team third-placed points overall (as a non-series entrant, the Bentley and the JRM/ART Porsche were ineligible for series points), with Hiroshi Hamaguchi fourth to keep both he and Rob Bell in the title chase.

Chao Li kept the JRM/ART Porsche GT3-R near the front of the field despite understeer issues as a result of a missing dive-plane courtesy of the opening lap fracas into turn one. Hamaguchi’s fifth placed finish was a fitting reward for a testing weekend which saw their primary car all but destroyed during Thursday’s official practice, whilst Richard Wee continued to impress, crossing the line seventh after a strong early stint by Irishman Matt Griffin.

Despite stopping twice, Jeffrey Lee and Christopher Mies put in a stunning effort to recover for eighth place, the Absolute Racing Audi duo one of the fastest cars on the circuit, whilst team-mates Jian Wang and Jingzu Sun were ninth ahead of new GTM class points leader Jacky Yeung.

Yeung had employed the services of Hong Kong’s Matt Solomon, the former GT Asia Series race winner setting a blistering pace during his opening stint to hand Yeung a 16-second lead, but as the laps wound down, a recovering Thomas Fjordbach closed in, the [then] points leader crossing the line second, just 12-seconds behind Yeung, but ultimately he was classified 14th and fifth in class after a CPS infringement. “We left the pits half a second shy of our allocated time, but that was enough to incur a post-race penalty,” a dejected Fjordbach admitted afterwards.

“It was a very tough race,” Aoki admitted post-race without his trademark smile. “So tough, we were passed by just about everyone and there was nothing we could do, but we’ll fight on and see where we end up tomorrow.”

Round 12 of the GT Asia Series, and the final round of the AAMC Macau GT Cup will get underway at 9:00am local time with the second and final 40-minute CPS race.

The 2014 GT Asia Series crown will be decided in Macau