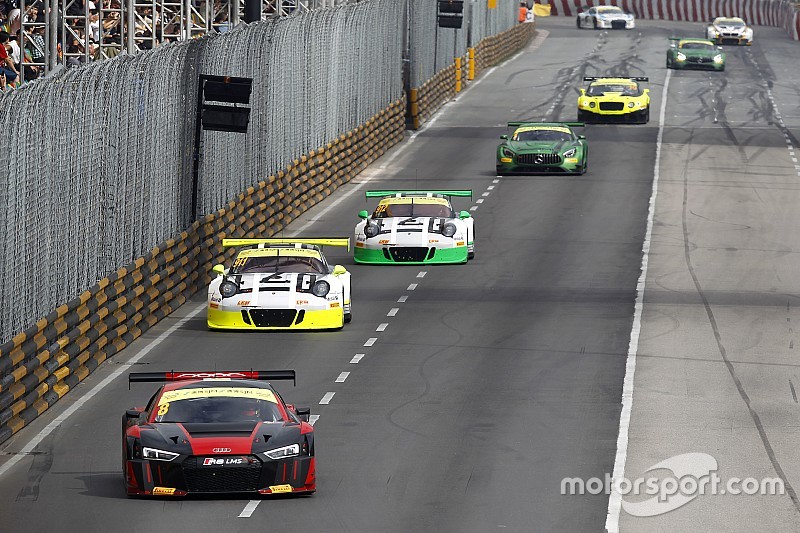 Laurens Vanthoor, who walked away from a spectacular 200km/h flip in the Macau FIA GT World Cup on Sunday, has defended safety at the street circuit.

The Belgian had just lost of the lead of the race when he clipped the kerb on the inside of the high-speed Mandarin Bend.

His car spun into the barrier on the outside and then air got caught underneath it, flipping him on to his roof as he skidded down the track.

With the race red-flagged immediately and no time for a restart, on a lap countback Vanthoor was amazingly declared the winner.

The high-speed accident prompted questions about whether or not the track was safe enough for the GT cars – but Vanthoor has no doubts it is perfectly good enough.

“I am still standing here so it is fine,” he said. “We have safe cars at Audi, the track is safe – otherwise I wouldn’t be standing here after a 250 km/h crash.

“It is obviously a bit more exciting than other tracks but that is why a lot of drivers like to come here and find it very challenging.”

Mercedes driver Maro Engel, who finished third in the GT race, reckons the challenge of Macau is very similar to the Nurburgring Nordschleife – and was something to be relished.

“This is the most difficult track in the world, probably together with the Nordschleife,” he told Motorsport.com. “So I think we're pretty much on track with this circuit.

“This is the track where the best GT drivers and brands should compete. It was a very unfortunate race, but it was a good call to stop it.

“However, maybe we should make sure to have a bit of a cushion in terms of time to run the race. In the end, this is what happened and we were not given the chance to go again. It's clear that there always will be safety cars and yellow flags."

When asked if his view on the venue had changed after witnessing Vanthoor’s accident, he said: “Mandarin is one of the fastest corners in the world and a huge challenge in a GT car.

"You're not flat but very fast. And you know there's a fine line between making it and crashing. But all in all nothing has changed for me."

Vanthoor added that the worst part of his accident was not the impact with the barriers but skidding down the track upside down.

“It was actually a very scary thing,” he said. “I’ve had some crashes in my career but this is the first time I have flipped over.

“The impact was hard but was acceptable. The scary part was to see the car going up, and you land on your roof – and you are facing everything upside down and seeing all the cars coming down the straight at high speed. That was a bit scary.”

Former F1 junior Barnicoat back with McLaren in GT role