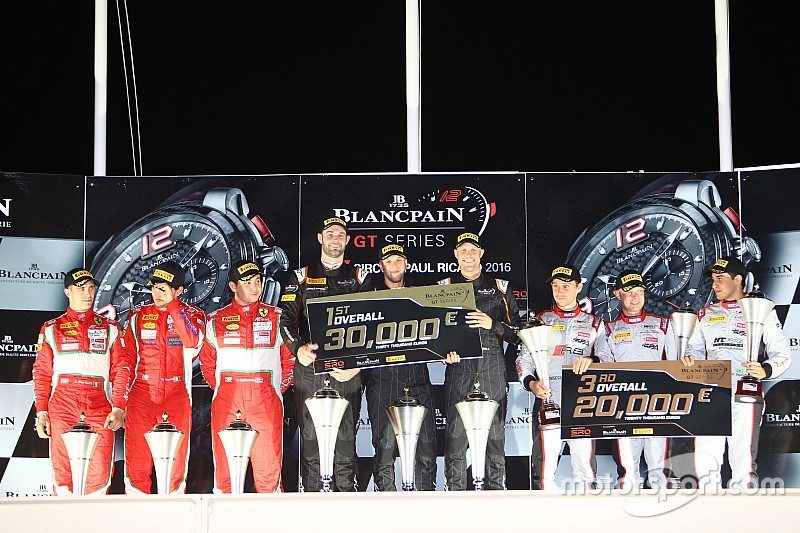 The result came as a nice reward to the Belgian squad after a 6-hour race marred with incidents for its other four cars.

The Belgian Audi Club Team WRT conquered a podium finish in the 1000 kms race of the Blancpain Endurance Cup held Saturday evening at the Circuit Paul Ricard, thanks to a faultless performance of the Audi R8 LMS #3 driven by Rodrigo Baptista, Filipe Albuquerque and Jan Magnussen, the GT legend who made his debut in the series and with Team WRT.

The result came as a nice reward to the Belgian squad after a 6-hour race marred with incidents for its other four cars. Kox-Käffer-de Leener (in the first lap!) and Leonard-Meadows-Frijns had to retire following consequences of contacts, while car #1 of the Vanthoor brothers and Fred Vervisch also paid a big toll (4 laps) to close fighting but could finish, although in P19. Will Stevens-Antonio García-René Rast brought home a points finish (9th) despite penalties and some technical issues.

Team Principal Vincent Vosse was only partly satisfied after the race: “It’s nice to see that the only car of ours not having hit trouble finishes on the podium despite starting from P20. It means we had the performance, and I am particularly happy for car #3, which had a difficult start of the season. Young Rodrigo, fast Filipe and my good old friend Jan made a perfect race. Still, I can’t be entirely happy when I look at the team’s overall results and all the problems and incidents that the other four cars had. It was a very eventful race and it seems that the Paul Ricard is always difficult for us… It’s also not very good news for the championship… We really need to do better in the next races and I’m convinced we can raise our game.”

The Audis R8 LMS of the Belgian squad shone in free practice, with 4 cars in the top 7, and in the pre-qualifying, with car #28 clinching the second-fastest time. In the decisive qualifying session, the battle was fierce, once again with the top 20 cars within little more than one second. Car #2 took P9, with cars # 28, 1 and 3 squeezed together in P18, 19 and 20. Car #4 qualified 33rd. In the initial laps, Michael Meadows ran an excellent 8th, with Will Stevens in P10, Fred Vervisch in P15 and Jan Magnussen in P18.

The two latter would climb to 9th and 14th respectively before two safety-car periods disrupted the race and prompted an earlier first pit stop and driver change for almost all cars. Among the Belgian Audi Club Team WRT troops, only Will Stevens stayed at the wheel of car #28, but the benefit of the move was annihilated by a drive-through as the car was released too early from its stop.
In the meantime, the Belgian team lived more drama, as a sparkling Dries Vanthoor on car #1 had climbed up to P4 after winning a couple of spectacular duels. Unfortunately, during one of those, a contact occurred with the McLaren #58 that provoked damage to the rear right wheel, forcing the young Belgian to a pit stop for repairs and redoing the geometry. The incident cost four laps and all chances of a podium finish.

By lap 55, Rodrigo Baptista on car #3 was in P12, right ahead of car #2 with Stuart Leonard at the wheel, with Antonio Garcia, very fast on car #28, in P19 and Fred Vervisch on car #1 in P42 and storming upwards throughout the field. Soon after, it was Leonard’s turn to be involved in a race incident with a Ferrari, which resulted also in damage to a wheel. He stopped for repairs and then for a drive-through, but after a sudden puncture, the car was withdrawn.

After mid-race, Jan Magnussen was 7th, Rene Rast 11th (despite persistent problems at the rear left) and Fred Vervisch 32nd, with Laurens Vanthoor (#1) and Filipe Albuquerque (#3) getting ready for their final double stint. It was the Portuguese to shine most in this closing phase, thanks also to perfect strategy during the last full course yellow, climbing up to P4, which became P3 and podium following the fire incident suffered by the leading Bentley in its penultimate pit stop. The other two cars also gained positions, with René Rast crossing the line in P7 on the #28 (which after the race became a P9 following a 30-second penalty for exceeding driving time in one of the stints) and Laurens Vanthoor bringing home the #1 in P19.

There was satisfaction, of course, among the drivers of car #3 for their podium finish, with Albuquerque stating: “We had no trouble, did no mistake and pitted at the right moment, it’s nice to start from P20 and finish on the podium”, while ‘Blancpain Rookie’ Jan Magnussen admitted: “I have enjoyed this experience very much and I am impressed with the level of competitiveness of the series, and also with the aggressive driving here in Europe”. An emotional Rodrigo Baptista added: “It has been a perfect weekend and it’s a very good result for me in this maiden season of GT racing in Europe and at this level”.

The Blancpain Endurance Cup will be back in one month, with the most important race of the year, the Total 24 Hours of Spa. In the meantime, the Blancpain community will be at the Nürburgring next weekend for the third round of the Blancpain Sprint Cup.