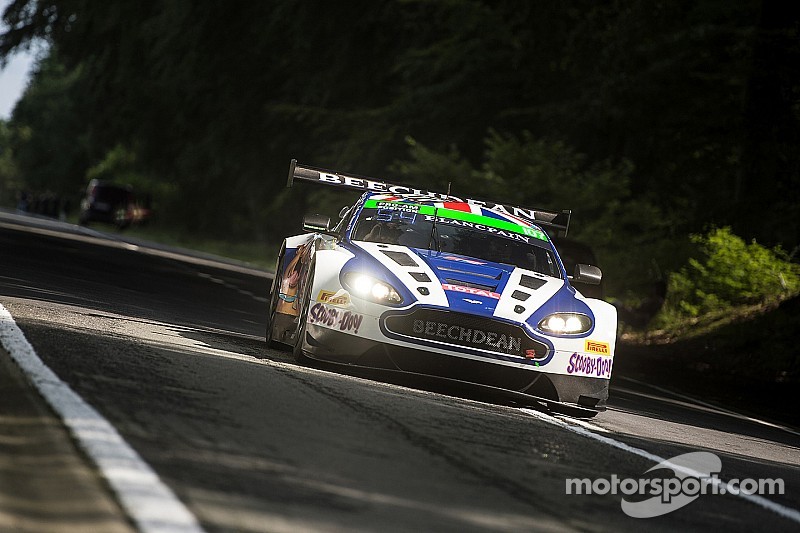 “We are very happy to be in the top-20 shoot-out,” commented Mücke, who qualified on pole for last year's race. “That was our target so to be in the top ten is even better. I’m really looking forward to the shoot-out, I have great memories from last year but this year will be tough - already, the lap times are much quicker than they were last year. It should be good fun, though.”

In the #38 V12 Vantage GT3, Aston Martin Racing works driver Darren Turner (GB) narrowly missed out on the top 20 due to traffic on the busy 7-km long Circuit de Spa Francorchamps. The Brit had to settle for 22nd place overall and eighth in class, but is confident that it’s enough for him and his MP Motorsport team-mates to work with in Saturday’s race.

“That wasn’t my greatest qualifying session,” said Turner. “There was a lot of traffic and yellow flags, which is to be expected with 60-odd cars on track and, although some people managed to get a good lap, we didn’t. Still, it’s a long race and we’re starting from the front half of the grid, so we’ll see what we can do on Saturday.”

The third fastest Aston Martin of the evening was the PGF-Kinfaun V12 Vantage GT3 in the hands of British driver Tom Onslow-Cole (GB) who, although only half a second off the top 20, will start the race from 31st.

“That was tough,” commented Onslow-Cole. “Every time I get in the car I go faster, but it seems so does everyone else! The car feels good and our Am drivers, Phil and Paul, are setting some really great lap times, which will be invaluable in a 24-hour race.”

It was another Aston Martin Racing works driver to qualify for Leonard Motorsport, as Pedro Lamy (PT) took the team’s black and yellow V12 Vantage GT3 out onto the cooling track. The ex-Formula One driver and five-times Nürburgring 24 Hours-winner recorded his fastest lap on lap two and his team-mates were unable to better it during the two qualifying sessions leaving them to start from 34th.

“It was a tough session thanks to several red and yellow flags, but all of our drivers stayed out of trouble to qualify for the race on Saturday,” commented John Gaw, Team Principal at Aston Martin Racing. “It’s fantastic that Stefan is in the SuperPole shoot-out tomorrow and we’re all looking forward to watching what should be a really exciting session.”