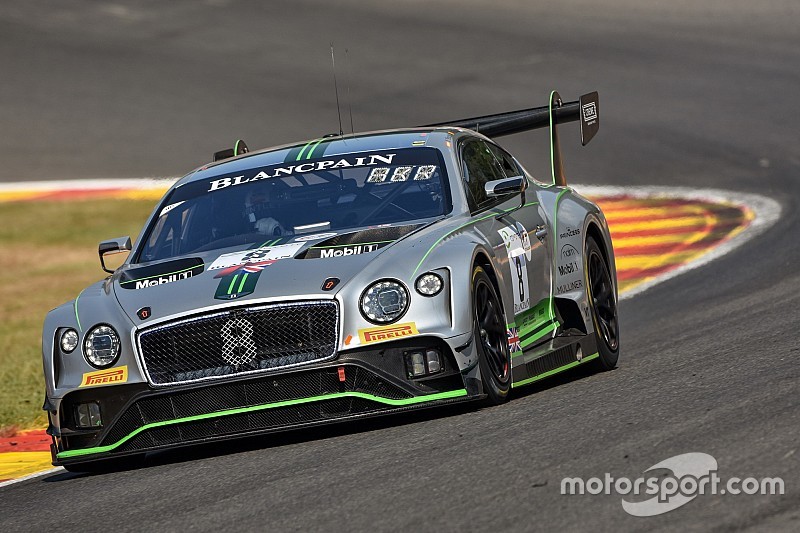 The factory M-Sport Bentley squad will mount a four-car attack on next year's Spa 24 Hours.

The British manufacturer has announced the expanded assault on the blue-riband round of the Blancpain GT Series in July as part of an reaffirmed commitment to the Endurance Cup segment of the BGTS and the Intercontinental GT Challenge in 2019.

M-Sport will run a pair of second-generation Bentley Continental GT3s with an unchanged driver line-up in the five BGTS enduros, as well the four other events that make up the expanded IGTS next year.

It will then field an extra two pro class cars at Spa, one with a line-up made up of drivers competing in customer Bentley GT3 cars around the world.

Once drivers have been chosen for this entry, Bentley will "look at our options for the fourth car", according to the marque's motorsport boss, Brian Gush.

He said that it was Bentley's intent to go to Spa with "four driver teams capable of winning the race".

South African Jordan Pepper will continue with the factory team after long-time Bentley driver Guy Smith stepped down from full-time racing after this year's Silverstone round of the BGTS in May.

He has been retained along with 2018 signing Jules Gounon and marque stalwarts Steven Kane, Andy Soucek, Maxime Soulet and Vincent Abril.

Gush said: "From the start of our GT3 programme, the BGTS Endurance Cup has provided an ideal platform for us to demonstrate the performance of our cars and develop them for our customers to race around the world.

"The IGTC allows us to extend our programme outside of Europe, which is vital to reflect the global presence of our brand."

Bentley will also make its roster of factory drivers available to customer teams around the world.

Soucek competed in this year's Pirelli World Challenge with the US K-PAX Racing squad.