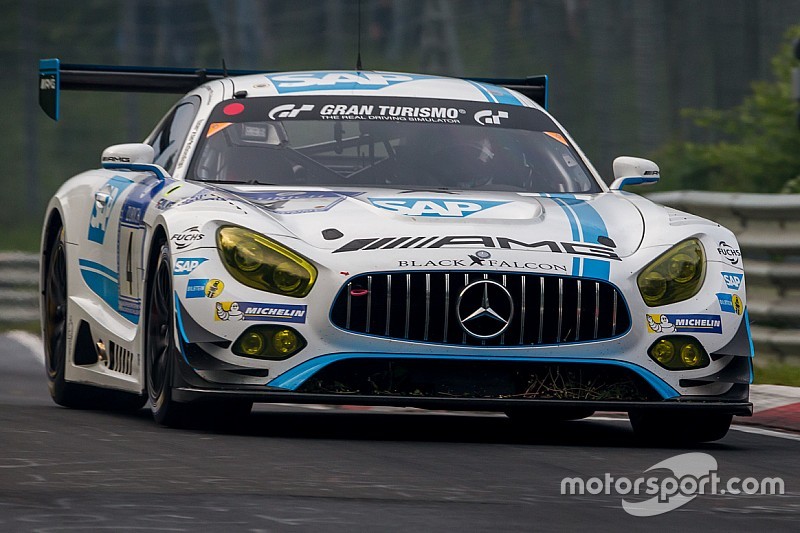 The next port of call for AMG - Team Black Falcon is Belgium, for the team’s third 24-hour race of the year and the penultimate round of the Blancpain GT Series Endurance Cup. Following a strong second place in the Dubai 24 that kickstarted the endurance racing calendar back in January and their epic victory in May’s Nürburgring 24 Hours, AMG - Team Black Falcon will be looking for another great result in the legendary Spa 24 Hours. Not only that, but the team have grabbed the headlines ahead of this year’s race with the reveal of a ground-breaking tie-in with alternative rock band Linkin Park, one of the biggest bands in the world. The band have designed the stunning livery the adorns the team’s Mercedes-AMG GT3 #00, and will be present in Belgium to cheer the team on.

The Linkin Park-backed car is the main image on the official poster for the Spa 24 Hours, and is due to be presented to the public during race week by members of the band. The striking chrome and red colours they’ve utilised are certainly going to stand out on the grid, and with the combination of its looks, the band behind it and the drivers in it, the Mercedes is bound to be a fan favourite. Linkin Park have sold over 68 million albums worldwide and have won two Grammy Awards; they’re long-time fans of Mercedes and racing, so they’re thrilled to be supporting AMG - Team Black Falcon in Belgium. Not only that, but they’ll be waving the Belgian flag that will signal the start of the 24 Hours.

The blue riband event in the GT racing year

The prestigious Spa 24 Hours is the blue riband event in the GT racing year, and is an event that was first held back in 1924. Mercedes have achieved a trio of victories spread right across the different eras of motorsport, from their first win back in 1931 with a classic Mercedes-Benz SSK, through the touring car period and victory in 1964 for a Mercedes-Benz 300SE and then the most recent win in the modern Grand Touring epoch with 2013’s laurels for an SLS AMG GT3. In 2016 AMG - Team Black Falcon will be looking to make it four wins for the Three-Pointed Star, and they are fielding three impressive driver line-ups in the 65-strong field of GT3 cars that is taking part in the race.

Literally the poster car for the Spa 24 Hours, #00 will be headed up by a driver who’s synonymous with Mercedes: the legendary and irrepressible Bernd Schneider (Germany). A five-time DTM champion and Mercedes brand ambassador, the motorsport veteran is still a not-so-secret weapon when behind the wheel. He’s sharing #00 with two incredibly fast young guns. Maro Engel (Germany) has put in many superlative performances during his career, but this year has been particularly stunning to watch. Similarly, Yelmer Burman (Netherlands) is super fast; this trio is a real statement of intent from AMG - Team Black Falcon.

The normal Pro-Am three-driver line-up of the #56 Mercedes-AMG GT3 will be expanded to four drivers to tackle the challenges of a 24-hour race. Driving #56 will be Team Black Falcon 2016 race-winner Oliver Morley (United Kingdom), Abdulaziz Al Faisal (Saudi Arabia) and Miguel Toril (Spain), with the three team regulars joined by a special guest driver: Dani Juncadella (Spain). Dani is a former F1 test driver and currently drives in the DTM for the HWA team. The team’s second factory-backed Pro-class Mercedes, #57, retains its regular crew of Hubert Haupt (Germany), Andreas Simonsen (Sweden) and Adam Christodoulou (United Kingdom), who have put in stellar performances throughout this year.

AMG - Team Black Falcon’s three Mercedes-AMG GT3s will be fighting against the cream of the GT world’s drivers and teams in Belgium, and of the 65 GT3 cars entered in the race almost half are competing in the top Pro class. The action on track starts on Thursday July 28th, when the capacity grid will take part in practice and qualifying sessions. On Friday there’s the excitement of the Super Pole session, where the fastest cars will be sent out at minute intervals to try and set the quickest lap time and grab the glory of pole position for the Spa 24 Hours itself. But it’s all about 16:30 on Saturday afternoon, when the lights will go green for the 2016 edition of the race and the cars roar down towards the vertiginous Eau Rouge corner for the first time.

Thousands of fans gather for Total 24 Hours of Spa Parade