Blancpain GT Series Endurance Cup to be decided at the Nürburgring 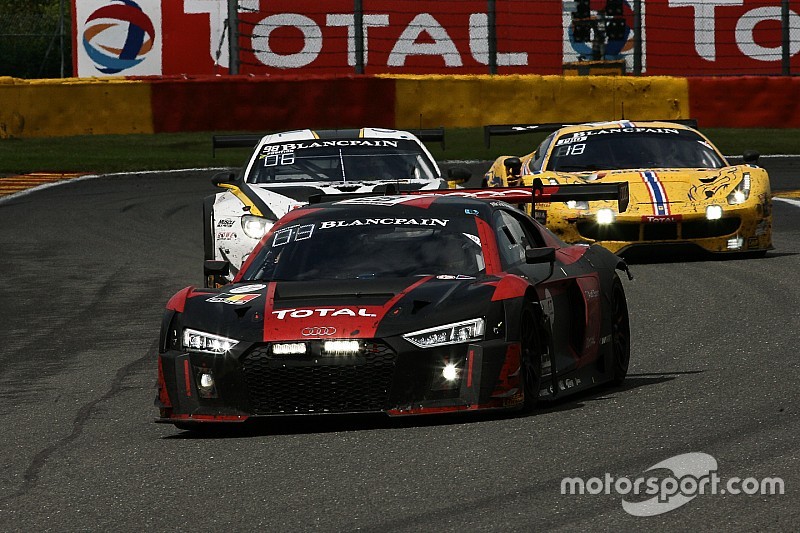 The battle for the 2016 Blancpain GT Series Endurance Cup will come to its conclusion.

55 cars will line up for the penultimate round of this season’s Blancpain GT Series at the Nürburgring next weekend (September 17/18). While the overall title cannot be won in the Eifel mountains, the battle for the 2016 Blancpain GT Series Endurance Cup will come to its conclusion after three hours of racing around the German track.

With two rounds to go in this year’s Blancpain GT Series, McLaren ace Rob Bell has a seven-point lead over Mercedes-AMG duo Maxi Buhk and Dominik Baumann in the overall drivers’ standings. With a maximum of 26 points on offer at the Nürburgring and 34 more up for grabs at the season finale in Barcelona, it is mathematically impossible for the overall drivers’ title to be decided in Germany.

The outcomes of the different Blancpain GT Series Endurance Cup competitions will, however, be decided given that the three-hour event in the Eifel is the last of the long-haul races. No fewer than four driver combinations could take the coveted trophy home on Sunday night. Garage 59 McLaren trio Rob Bell, Shane Van Gisbergen and Côme Ledogar lead the standings with 68 points courtesy of their wins at Monza and Le Castellet. However, due to a far from perfect race at the Total 24 Hours of Spa the lead they enjoyed after the French round has dwindled to a mere nine units. Furthermore, Shane Van Gisbergen will be absent at the Nürburgring, due to other commitments. He will be replaced by Duncan Tappy.

It is Bentley Boys Andy Soucek, Maxime Soulet and Wolfgang Reip who lead the chasing pack. Although the #8 Bentley Team M-Sport Continental GT’s drivers are yet to win an Endurance race in 2016, they have come very close on a few occasions, especially at Le Castellet and Spa. For Reip it would be extra special if all pieces would fall into place at the Nürburgring, for the Belgian could become the first driver to successfully defend his Blancpain GT Series Endurance Cup overall title.

Four points behind the Bentley trio (and, for the mathematically challenged, 13 adrift of McLaren’s) are Total 24 Hours of Spa victors Alexander Sims, Philipp Eng and Maxime Martin, who are tied on points with Silverstone race winners Buhk, Baumann and Jazeman Jaafar. Martin cannot make it to the Nürburgring, but will be replaced by 2015 Total 24 Hours of Spa winner Nick Catsburg. With the crews that are tied in third driving a BMW M6 GT3 and Mercedes-AMG GT3 respectively, this year’s Endurance Cup contenders are at the wheel of four different cars, a testimony to the competitiveness of the series.

The gaps in the Endurance Cup teams’ standings are even closer, with Garage 59 leading Bentley Team M-Sport by only six points. HTP Motorsport and ROWE Racing are 13 and 15 points adrift, respectively, while Belgian Audi Club Team WRT’s 18-point deficit means they also still have a shot at defending the crown. Equally, a good result for HTP Motorsport could see them clinch the overall teams’ title, since their Hungaroring Sprint victory handed the German squad an 18-point advantage in those standings.

Pro-Am: Can Broniszewski claim the Endurance Cup as well?

Since the Hungaroring Polish driver Michal Broniszewski is certain to win the Blancpain GT Series Pro-Am title, enjoying an unassailable 62-point lead in the overall Pro-Am standings. In the Pro-Am division of the Blancpain GT Series Endurance Cup things are far from decided, however. Together with his Kessel Racing team-mates Alessandro Bonacini and Andrea Rizzoli (the 2014 Pro-Am Endurance Cup winner) Broniszewski currently has 10 points in hand over ISR trio Franck Perera, Philippe Giauque and Henry Hassid. A win for the Audi drivers means that the Kessel Ferrari must finish on the podium for its crew to claim the title. And even that might not be enough if the ISR boys score the point for claiming pole position.

Am Cup: Endurance Cup is Kessel’s for the taking

With overall Am Cup leader Claudio Sdanewitsch only competing in the Blancpain GT Series Sprint Cup, the overall Am Cup title fight will be decided at the final event of the season in Barcelona. In the Endurance Am Cup standings Liam Talbot, Marco Zanuttini and Vadim Gitlin already have one hand on the trophy after recording class wins at both the Le Castellet round and Total 24 Hours of Spa. With a 21-point advantage over Pierre Ehret (#333 Rinaldi Racing Ferrari) and Gilles Vannelet, Jean-Luc Beaubelique and Maurice Ricci (#87 AKKA ASP Mercedes-AMG) an eighth place at the finish would be enough for the Kessel Racing drivers to seal both the drivers’ and teams’ Endurance Cups in the Am category.

Côme Ledogar (#58 Garage 59 McLaren): "Spa was not our best race, maybe we tried too hard to compensate the difference in lap times. I'm afraid we could see the same scenario at the Nürburgring, but - as always - we will do our utmost best to the maximum out of the car. By focusing solely on the task ahead and not spending too much in watching what the competition does, we could get a good result."

Wolfgang Reip (#8 Bentley Team M-Sport Continental): "I am very privileged to have been in a team that can compete for the title for the second year running. Both my team of 2015 and Bentley this year have shown to be able to run at the front. Unfortunately for us, we have been unlucky at some races, otherwise we could have travelled to the Nürburgring with a more advantageous situation. Considering the level of the competition, we can have only one aim in the Eifel and that is to win."