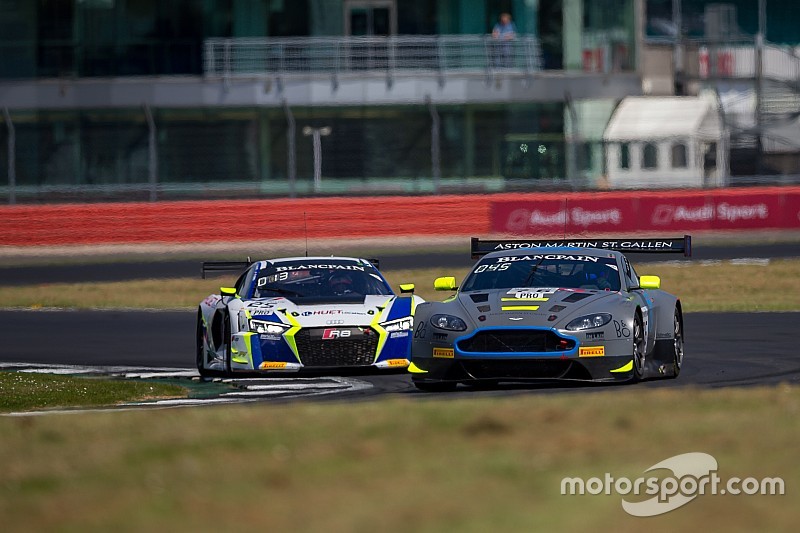 The new R-Motorsport Aston Martin team of Nicki Thiim, Matthieu Vaxiviere and Jake Dennis dominated the Silverstone round of the Blancpain Endurance Cup.

The #76 Jota/Arden-run car was excluded from qualifying after taking pole, as the Aston Martin's data logger was found to contain no data, violating the sporting regulation that states that it must work throughout the event.

The team filed an appeal and took part in the race, leading for the majority of the three-hour event to win by 10.9s.

Vaxiviere converted pole into the lead of the race and held a narrow advantage over the #88 AKKA ASP Mercedes, started by Adam Christodoulou, going into the first round of pitstops.

Dennis dropped behind Christodoulou's teammate Tristan Vautier during the pit cycle, before quickly moving the Aston Martin back to the front with a neat move at Luffield.

The Briton was then able to drive away from the Frenchman, extending the lead to 16s prior to handing over to Thiim.

Raffaelo Marciello, the AKKA ASP team's third driver, lost a couple of seconds to the Aston Martin in the second round of stops and then lost further ground early in the stint, before gaining back half of the gap in the closing stages.

The car jumped from sixth to fifth during the first pitstop sequence before Palttala moved the Japanese car ahead of the Black Falcon Mercedes driven by Luca Stolz and then the second of the R-Motorsport Aston Martin with Alex Brundle at the wheel.

Siedler edged towards the AKKA ASP Mercedes after the final stops, before having to resist a late challenge from the WRT Audi driven by Dries Vanthoor.

The Audi, in which Vanthoor was joined by Christopher Mies and Alex Riberas, was a shade over half a second behind at the chequered flag.

The second R-Motosport Aston Martin in which Brundle was joined by Marvin Kirchhofer and Maxime Martin took fifth on the final lap.

Martin was able to move the car past the Black Falcon Mercedes, now with Yelmer Buurman at the wheel.

The Silver Cup class was won by the Black Falcon Mercedes of Abdulaziz Al-Faisal, Hubert Haupt and Gabriele Piana.

The Emil Frey Jaguar of Alex Fontana, Adrian Zaugg and Mikael Grenier led the way in class until a slow second pitstop, which was followed by the right rear wheel parting company with the car.