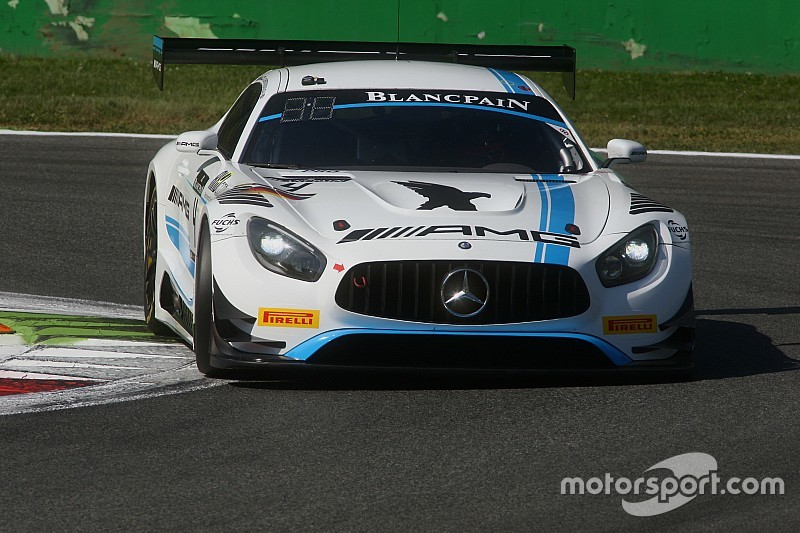 Mercedes claimed pole position for the third Blancpain Endurance round of the season at Paul Ricard thanks to a last-gasp lap from Yelmer Buurman.

The Black Falcon Mercedes driver posted a 1m56.442s after the chequered flag had fallen at the end of the final 15-minute qualifying session to take the pole.

Buurman had been on top of the timesheets in the factory Mercedes-AMG GT3 before late laps from Ferrari drivers Davide Rigon and Alessandro Pier Guidi briefly demoted him to third.

Buurman said: "I think it was a perfect lap after I struggled a bit on the first lap, because the tyres weren't quite there yet."

Pier Guidi was just over a tenth behind Rigon on 1m56.599s in the best of the AF Corse-run Spirt of Race Ferraris.

Fourth place went to Albert Costa in the #14 Emil Frey Jaguar G3s, which was less than half a tenth behind.

Frank Perera took fifth in the best of the HTP Mercedes cars, while Steven Kane was sixth in his M-Sport Bentley Continental GT3.

The Grasser Lamborghini Huracan GT3 that won the opening two Endurance rounds at Monza and Silverstone was only 20th in the hands of Mirko Bortolotti.

The top 20 cars all qualified within a second of the pole winner.