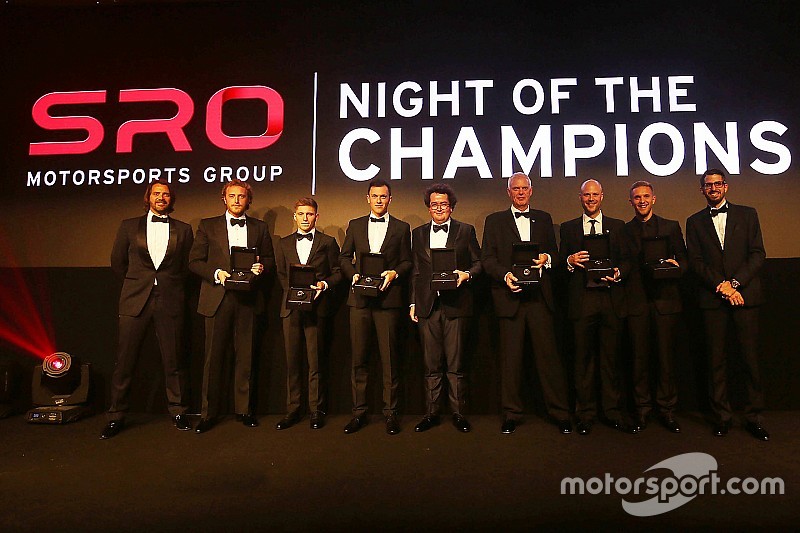 This year’s Pro-Am category was dominated by Michal Broniszewski and Kessel Racing who won the overall, Sprint and Endurance Cup titles. Another Kessel Racing trio – Liam Talbot, Marco Zanuttini and Vadim Gitlin – took the Am Cup in the Endurance races, but the overall and Sprint Cup Am honours went to AF Corse and Claudio Sdanewitsch.

SRO’s Night of the Champions also featured the inaugural Sean Edwards Trophy, which is awarded to a driver aged 21 or under. They must have experienced both Sprint and Endurance racing during the season, and - as well as showing both speed and skill - have demonstrated the same spirit as Sean. For the 2016 season the nominees were Luca Stolz, Jules Szymkowiak and Dries Vanthoor, with the Sean EdwardsTrophy eventually going to Jules Szymkowiak. The 21-year-old Dutchman paired up with experienced Bernd Schneider this year, took the win in the Brands Hatch Qualifying Race and finished in fourth in the overall Blancpain GT Series Sprint Cup standings.

The champions in the Blancpain GT Sports Club were honoured as well, with Michal Broniszewski taking the overall drivers’ title and Martin Lanting claiming the Iron Cup for a second year running.

Stephane Ratel (Founder and CEO, SRO Motorsports Group): “2016 was another eventful and successful season, with never-before-seen starting grids for all ten races of the Blancpain GT Series. The current formula clearly works and we are aiming to make it even better next year. The British GT Championship showed some close and exciting racing and the second season of the Blancpain GT Sports Club was a success as well. Furthermore, our successful participation in the Pirelli World Challenge gives the SRO Motorsports Group a true global dimension. Next year will see the introduction of the GT4 European Series Southern Cup in Europe, we will expand the Blancpain GT Sports Club and the Intercontinental GT Challenge will get a round in the United States. In short: we are looking forward to 2017! I would also like to take this opportunity to thank all our drivers, teams, event promoters and partners, especially Blancpain and Pirelli, without whom it would not be possible to organise and promote our series.””

Dominik Baumann (2016 Blancpain GT Series overall champion): “I think this is my most important title ever. Maxi and I became European GT3 champions together in 2012 and now again overall champions in 2016, which is quite impressive. We had a hard time at Spa, due to the five-minute penalty, but we still scored some points for the championship. It is a pity we lost the Endurance Cup by one point in the end. But I really enjoyed Budapest, our first win in the Blancpain GT Series Sprint Cup, and our victory at Silverstone was just amazing.”

Maxi Buhk (2016 Blancpain GT Series overall champion): “I started the season with one clear goal: to have a good season, without mistakes. We did not know what to expect as our car was new. I wanted to confirm the success from last year, which worked out in the end. The team put in a strong performance this season. Obviously I am happy with the title, but from an emotional point-of-view nothing comes close to winning Spa in 2013.”

Michal Broniszewski (2016 Blancpain GT Series Pro-Am champion): “It is a great feeling to have won this title, especially since it was not easy to win it. I started the season without any big expectations, because over the course of a season too many things can happen. I had some good weekends this season, but the nicest one was the Brands Hatch weekend. I competed in both the Blancpain GT Series Sprint Cup and the Blancpain GT Sports Club and at the end of the weekend I had three wins and one second place. A unique result.”

Claudio Sdanewitsch (2016 Blancpain GT Series Am champion): “It still feels very good to have won this title. After all, this is one of the toughest championships around. I mainly focused on the Sprint races this year, but I had a taste of the Endurance events as well, and I would love to do some more Endurance races next year.”

Enzo Ide (2016 Blancpain GT Series Sprint Cup winner): “This was the first time that I have won a championship at this level, and it is a great feeling. At the WRT team we have been working hard for a couple of years now, but there was always something that threw us back. Still, before the start of the season I was fully confident that the formula of a factory driver and myself could work. I have to admit that the Brands Hatch weekend, the first time we reaped the rewards with a third in the qualifying race and a win in the main, felt absolutely great. Since that weekend we were always at the front, claiming the title. I will be back next year to try and do it again!”

Come Ledogar (2016 Blancpain GT Series Endurance Cup winner): “I started the year in a completely new environment for me, but I was quickly put at ease by the team. Rob Bell played an important role in that. The McLaren proved to be a fabulous car, but I have to admit that when I took the wheel for the final stint at the Nürburgring I was convinced we had lost it. When I crossed the line I kept asking where we finished, but I only got the message we were champions when I was almost at the first corner! It was quite emotional. And it is a good thing that the three of us finished on the same points total, despite Shane having to miss the final round.”

Jules Szymkowiak (Winner Sean Edwards Trophy): “This is completely unexpected, I am a bit speechless, I must admit. It is a massive honour to receive this trophy. I think it is the result of all the hard work we have put in this year. It has not been an easy season, with some ups-and-downs. But driving with Bernd Schneider was a once in a lifetime opportunity, and I think I got the most out of it. This Sean Edwards Trophy will certainly help me to set the next step in my career.”

Fisichella to race full-time in Blancpain Endurance in 2017